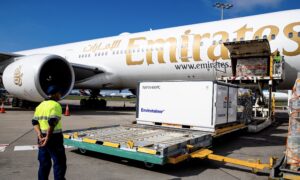 Two men involved in helping parents abduct their own children have been released on bail in Brisbane, Australia, on Oct. 19, after a police investigation uncovered a parental abduction ring operating across multiple states.

Update: Police on Nov. 5 served three more women with summons to appear in court, in relation to their participation in the parental abduction ring.

The group was allegedly modifying a yacht and was planning to leave Australia to New Zealand or Zimbabwe, possibly with two mothers and three abducted children on board, 9 News reported. Police found and raided the yacht in Perth on Oct. 18.

“What we think that vessel was likely to be used for was to convey children from where it was moored in Fremantle to Tasmania and then perhaps onto New Zealand,”Australian Federal Police (AFP) major crime and operation commander Justine Gough said, AAP reported.

Police said they raided multiple properties in Grafton, Dubbo, Perth, and Townsville to find the suspects and the yacht. Police have arrested and charged four people so far—among them the two men—but believe the group has about ten main suspects.

The three children who were found are safe, police said.

Police said that one of the men, William Pridgeon—a 64-year-old GP from Grafton—organised and financed the recently busted operation to help two women abduct and conceal their children, effectively breaking family court orders. He has since been granted bail.

Pridgeon is also the founder of the Australian Anti-Paedophile Party.

According to investigators, several mothers who sought help from the child abduction ring claimed they feared the children were being sexually abused by their fathers.

Another other man granted bail, 63-year-old Patrick O’Dea from Grafton, helped the operation by transferring money to the two mothers, and using social media to paint the children’s fathers as pedophiles, police said.

According to AFP, the women and children were relocated and given aliases and disguises to avoid authorities.

“The level of sophistication with this case, especially with encryption communication, is quite high,” Commonwealth prosecutor Christine Wilson said, the ABC reported.

“The actions of this group do not protect children. What it does is potentially endanger the safety and wellbeing of them,” AFP Assistant Commissioner Debbie Platz said, according to a news release.

The bust is the latest of an ongoing investigation into people conspiring in parental abduction of children in Australia, called Operation Noetic, that began two years ago.

Operation Noetic has so far recovered 10 children along with the parents who abducted them. Five of the ten were abducted by the group to which Pridgen and O’dea belonged.

Police believe the group comprises about 10 main members and a wide network of contacts who lend aid to the group’s child-stealing operations. The contacts provided funding, food, accommodation, and transport.

Police said the group was able to evade authorities for a decade by using fraudulent IDs, encrypted messaging apps, and an internal cash economy, AAP reported.

“We believe this group has sought assistance from other people—some who may be unaware of their involvement in criminal activity—so we are urging anyone with any knowledge about these activities to come forward to the [AFP],” Platz said.

Pridgeon and O’dea had been refused bail in Grafton Local Court on Oct. 18. Both were then extradited from New South Wales to Queensland to be released on bail in the Brisbane Magistrates Court under strict conditions, the ABC reported.

Pridgeon has to report daily to police, not visit Queensland for any reason other than court matters, and to surrender his Australian, New Zealand, and Zimbabwean passports, the ABC reported. He is not allowed to use social media, nor contact those involved in the kidnapping operation. O’dea is also subject to similar conditions.

Pridgeon was charged with two counts of conspiracy to defeat justice and dealing in proceeds of crime. Police added stalking and child stealing to the charges on Oct. 19.

O’Dea was charged with two counts of conspiracy to defeat justice, using a carriage service to menace, harass, or cause offence, and publishing an account of proceedings.

On Oct. 18, police had also arrested an 83-year-old Townsville man, Arthur Doublebay, and a 78-year-old Perth woman for helping the operation.

Doublebay was granted bail under strict conditions including surrendering his passport, having no contact with 36 identified people, and reporting to police three times a week.

The woman is due to face the Perth Magistrates Court on Dec. 14.