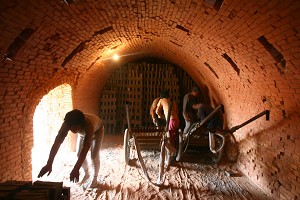 Many children and handicapped persons are kidnapped and sold to underground brick factories in Shanxi and Henan Provinces. They are forced to work 14 to 16 hours a day. The picture shows a brick factory in Mou County in Henan Province. (Epoch Times Archive)
China

Lured off the street and sold for a pittance, over a thousand school-aged children have been working as slaves in brick factories in China's Shanxi province.

The conditions described are atrocious: children as young as 8 hauling bricks for over ten hours a day and facing regular beatings. Yet a government response has been slow in coming, and allegations are swirling that officials have been paid off in exchange for inaction.

According to media reports, local authorities have been reluctant to take action to stop the child slavery, ignoring the please of parents.

Reports from mainland media state that most of the children were lured or kidnapped by smugglers from Zhenzhou train stations, bus stations, under bridges, or on the streets. The children were reportedly sold for approximately $65 each to brick factories in Shanxi Province.

Child slavery is not a new phenomena, according to local news reports, yet many local brick factories that employ the slave labour are reported to have special connections with the government that keep them in business.

Beijing Youth reported on June 15, 2007, that a son of a Party Chief in Caosheng Village owns one of the underground brick factories in Hongdong County and receives special protection from government officials.

Chai Wei, father of a child slave, said that he once tried to save some children from a brick factory in Linyi County. However, police refused to help because the owner of the factory was a powerful man. In the end, Chai only saved seven children. On another occasion, Chai was bluntly refused help by police from Yongji County.

According to the Henan TV Station City Channel, a parent found his child in a brick factory with the aid of the police. At the same time, he found another child from the same town he was from and wanted to take that child back.

The local police told him the factory spent hundreds of yuan to purchase the child and said, “You just find your child and leave others' business alone.”

On June 5, 2007, an article about the fathers of four child slaves was posted on a Chinese BBS site, describing the conditions faced by the children.

“These barefoot children work all day and their hair is so messy they look like barbarians,” it reads. “Some have been isolated from the outside world for seven years; others are beaten and become disabled after trying to escape; some of them have burned and bloody backs because the workers brand their backs with red hot bricks.

“The children have to work for over 14 hours a day and are never fed properly. If they get too tired and slow down, the supervisors pick up bricks and throw them at their heads. If the bleeding gets bad, a dirty piece of cloth is used to stop the bleeding but the children have to continue working. Brutal beatings happen all the time.

“The children are never taken to the hospital if they incur injuries from the beatings. If their injury worsens and there is no hope of recovery, they are buried alive. These children also suffered severe skin diseases from lack of showers and proper hygiene. The youngest is 8 years old.”

On June 5, the media in Henan started to collect the names of missing children hoping to turn the list over to the Public Security Departments. Yet there has been little indication that the central government has taken the recent revelations about child slavery seriously.

In fact, it took nearly two weeks for the central government to begin investigations. Even then, those appointed to deal with the issue were low-ranking officials.