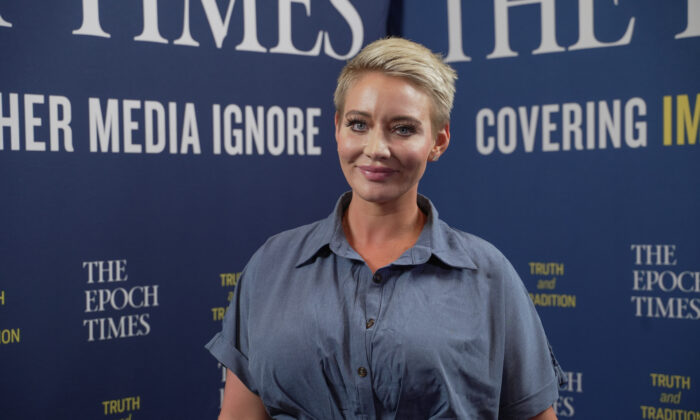 Eliza Bleu, a sex-trafficking survivor and advocate, at the FreedomFest conference in Las Vegas on July 15, 2022. (The Epoch Times)
Human Trafficking

Bleu, who was groomed and then trafficked as a teenager, now advocates for victims and for an end to the criminal enterprise.

“Nowadays, there is an entire market for this material, and it’s posted on the main feed of our regular social media platforms,” she said. “I wrote a story for The Blaze about a pedophile child abuser that had 290,000 Twitter followers and posted child sexual abuse material on the main feed for four years on Twitter.”

Trafficking Survivor Eliza Bleu: How My Abuser Preyed on My Vulnerabilities

This issue is made much worse by the fact that children are sharing self-generated sexual content on the internet, and a third party or sex trafficker gets a hold of it and blackmails the child for profit.

“The numbers in the data about self-generated content just off of Facebook alone are mind-blowing, in the millions a month. So children are either being blackmailed, groomed … or extorted,” said Bleu, also mentioning the relatively new term, “sextortion,” in which a third party obtains sexual images and threatens to share them unless the victim sends the perpetrator money or performs sexual acts.

In the month of May, Bleu said, Twitter removed 46,000 child sexual exploitation or nonconsensual images and videos from the platform. In comparison, the company removed only 2,000 posts for violating its “terrorism” terms of service, she said.

Children who are trafficked, in the vast majority of cases, are manipulated by people that they trust, Bleu said. The abuser or pedophile grooms the child, meaning they pinpoint and exploit their weaknesses.

Bleu said that in her case, her abuser groomed her by finding out her vulnerabilities and preying on them over a prolonged period.

Grooming can take on many different forms, as in the case of Ghislaine Maxwell, who groomed and helped traffic young girls for billionaire Jeffery Epstein’s sex trafficking ring, she said.

Very rarely is it a matter of kidnapping a child, which does happen but is less common, said Bleu.

“I think that this preconceived notion that it’s always kidnapping is very dangerous,” she added.

This narrative that victims are only those who are physically gagged and bound negates the reality of the vast majority of victims of sex trafficking and human trafficking, who are “less likely to self-identify and step forward for healing and hope that they deserve,” said Bleu.

Victims often blame themselves for the dangerous situations in which they find themselves, so it is important to understand that traffickers prey on the vulnerable and have specific techniques they use to gain the child’s trust, Bleu said.

Evil in the World

Only in the last 10 years have things started to change in our understanding of what sex trafficking is and how prevalent it is, said Bleu, adding that when she was victimized, society didn’t have have the terminology to discuss the issue or to understand the dynamics at play.

“At the time, we didn’t have the language,” she said. “You would have been thought of as a minor prostitute, a drug addict—something else.”

Bleu said it is not just a matter of teaching children not to trust strangers. It’s more important for children to have unconditional love from their families or other adults, who will believe and not judge them.

“There is a layer of trust there that needs to be had. I think it’s more of a lesson of, if something looks too good to be true, it probably is, and there are evil individuals in the world,” said Bleu.

One of the things that helped her heal from being trafficked, and is very important for survivors, is to learn the history of evil regimes, Bleu said, because it helps victims understand that there is evil in the world.

Bleu is always looking for the good in these horrific instances, she said.

“The silver lining is that we can have these conversations,” Bleu said, adding that every time there’s a big case in the media, “more survivors feel like they can step forward. They know they’re not alone.”

Bleu said that as a survivor of sex trafficking, each day is a success, but she also finds it important to help change social media companies’ child abuse reporting logistics and policies, she said, such as getting Twitter to add a special report button for nonconsensual and exploitative child sexual abuse material.

Having the Big Tech companies use innovation to help children is her focus, rather than asking the government to regulate the platforms, Bleu said. She knows the government can overstep its bounds and does not want the public’s privacy jeopardized to help sex-trafficking victims.

“I don’t think that the government has earned our trust—any government. And we have to proceed like that. So that’s why I’m always encouraging innovation and prioritizing reports.”

Bleu said that she, like most survivors of sex trafficking, developed a phycological bond called “Stockholm syndrome,” where the victim is drawn to and often “in love with” or dependent on the perpetrator. This was true about her second trafficker, who she was bonded with, and the only reason she escaped the situation was that “seeds of hope” were planted, she said.

One night, Bleu saw a YouTube video by a fellow survivor that resonated with her, after which she reached out to a local organization and got a survivor advocate that helped her get to a safe house.

“Unfortunately, my trauma bonds and my Stockholm syndrome with my former abuser was so, so deep and so thick that a two-year program at the survivor safehouse only lasted for three months,” said Bleu.

Even though it took Bleu more time to finally get away from the abuser, she said, there were still seeds of hope planted inside her.

“I started to feel like I had value and worth and like I was worth something more.”

It took time for her to “snap” out of the brainwashing, she said.

“I try not to judge people that have fallen for propaganda, or other types of things. Because I fell for it, too. It’s just different.”

In order to escape, the survivor has to understand the truth about themselves. For some people, its a shock to their system, Bleu said, but for others, the truth sinks in slowly.

Bleu said her motivation to do this advocacy work is that she wants all people to be free, both physically and mentally. To that end, she urges people to be openminded and nonjudgmental about victims of trafficking, and to be willing to talk about the topic, because someone may choose to trust them with their story.

“A survivor or victim and an abuser can look like anything. It could be anyone: any age, any gender, any race, any ethnicity, and any religious background,” she said.

Bleu, like all survivors, has had to find the courage to both tell her story and to help other survivors.

“I never thought anybody would ever take anything I said seriously, and now I get to write news articles, which is like a dream come true,” she said. “I get to meet my heroes, and we meet on an even playing field, and I’m their equal and they see me as such, and it’s an honor.”