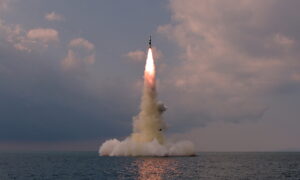 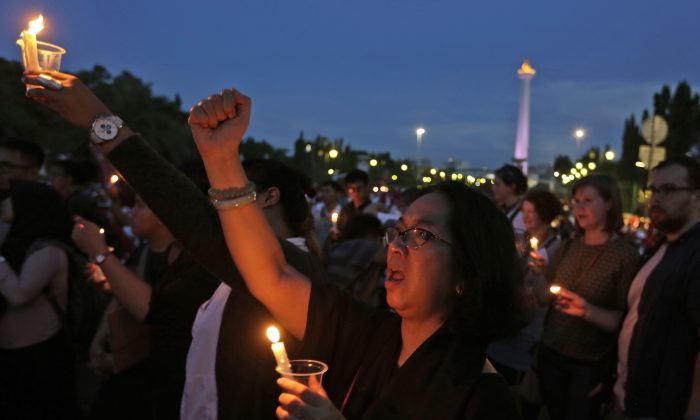 An activist holds a candle and shouts slogans during a vigil for a teenage girl who was raped and murdered by 14 men in Bengkulu province on Sumatra island, outside the presidential palace in Jakarta, Indonesia, Wednesday, May 4, 2016. (AP Photo/Dita Alangkara)
Asia & Pacific

Child rapists in Indonesia will face tougher punishments, including the death penalty and chemical castration, the president said on May 25.

President Joko Widodo announced on Twitter that the child protection regulations had been signed.

The new rules come after a 14-year-old girl, Yuyun, was gang-raped and killed when she was on her way home from school last month.

Widodo says the tougher punishments were “intended to overcome the crisis caused by sexual violence against children,” according to the BBC.

The new regulations will be in effect immediately, however, they could be overruled by the parliament later.

People in Indonesia praised the regulation.

“Castration is intended to have a deterrent effect and prevent repeat sexual offences,” said Abdul Malik Haramain, a politician from the Islamic party the National Awakening Party, according to Aljazeera.

Not everyone agrees with the punishment.

“The castration law is evidence that the government does not view sexual assaults as act of violence but merely as a matter of controlling sexual urges,” said Mariana Aminudi from the National Commission on Violence Against Women on Twitter.

“Violence will not be stopped by violent punishments,” said Sandra Moniaga from the National Commission on Human Rights, who also disagreed with the new regulation.

The previous penalty for rape, of either a child or adult, was a maximum of 14 years in jail.

Sex offenders may also be forced to wear monitoring devices after they are set free, according to the BBC.

The true numbers of sexual violence incidents are unknown, since crimes in the southeast Asian country appear grossly under-reported.

There were less than 5,000 reported cases of sexual violence in Indonesia in 2013 (among a population of over 250 million), according to the United Nations Office on Drugs and Crime.

Yet in the United States, more than 300,000 cases were reported in the same year.

But a survey conducted several years ago, when Indonesian men (aged 18-49) were asked if they ever forced a woman to sex or failed to get her consent, almost 13 percent affirmed.

The survey was conducted in Jakarta and two other localities between 2011 and 2012 as part of a large UN study on sexual violence in Asia and the Pacific.