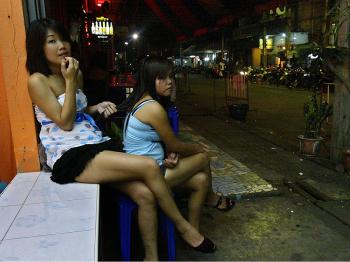 The Unrelenting Scourge of Child Prostitution

NEW YORK—Their names are Chandrika, Hamida, Amod, Madhuri, Maria, or Jenny. And as varied as these children’s names are their nationalities: Indian, Bangladeshi, Nepalese, Nicaraguan, or North American.

What unites them is that they have been made to work as prostitutes and, in the process, have endangered their lives and well-being and seriously compromised their futures.

It is estimated that 4 million women and girls worldwide are bought and sold each year either into marriage, prostitution, or slavery. Approximately 1 million children enter the sex trade every year. (Although most are girls, boys are also involved.)

As many as 50,000 women and children from Asia, Latin America, and Eastern Europe are brought to the United States and forced to work as prostitutes or servants. In the United States during the past two years, the government has prosecuted cases involving hundreds of victims. In other countries where this problem is frequent, the prosecution rate is even lower.

According to UNICEF, 10,000 girls annually enter Thailand from neighboring countries and end up as sex workers. Thailand’s Health System Research Institute reports that children in prostitution make up 40 percent of prostitutes in Thailand.

And between 5,000 and 7,000 Nepali girls are transported across the border to India each year and end up in commercial sex work in Mumbai, Bombay, or New Delhi.

Although the greatest number of children working as prostitutes are in Asia, Eastern European children from Eastern European countries, such as Russia, Poland, Romania, Hungary, and the Czech Republic, are increasingly vulnerable.

As a social pathological phenomenon, prostitution involving children does not show signs of abating. In many cases, organized groups kidnap children and sell them into prostitution, with border officials and police serving as accomplices.

The U.N. Special Rapporteur on Violence Against Women has called attention to the levels of state participation and complicity in the trafficking of women and children across borders.

Because of their often-undocumented status, language deficiencies, and lack of legal protection, kidnapped children are particularly vulnerable in the hands of smugglers or corrupt and heartless government officials.

Commercial sexual exploitation of children is increasing worldwide. There are several reasons. These include increased trade across borders, poverty, unemployment, low status of girls, lack of education (including sex education) of children and their parents, inadequate legislation, lack of or poor law enforcement, and the eroticization of children by the media, a phenomenon increasingly seen in industrialized countries.

There are also special social and cultural reasons for children entering into the sex trade in different regions of the world. In many cases, children from industrialized countries enter the sex trade because they are fleeing abusive homes.

In countries of eastern and southern Africa, children who became orphans as a result of AIDS frequently lack the protection of caregivers and are, therefore, more vulnerable to sexual abuse and exploitation.

In South Asia, traditional practices that perpetuate the low status of women and girls in society are at the base of this problem.

Children exploited sexually are prone to sexually transmitted diseases and AIDS. In addition, because of the conditions in which they live, children can become malnourished and develop feelings of guilt, inadequacy, and depression.

Besides the moral and ethical implications, the impact that sexual exploitation has on children’s health and future development demands urgent attention.

Throughout the world, many individuals and nongovernmental organizations are working intensely for the protection of children’s rights. Many times, their work puts them in conflict with governments and powerful interest groups.

Among the U.N. agencies, UNICEF has been particularly active in calling attention to this phenomenon and in addressing the root causes of sexual exploitation. It does so by providing economic support to families so that their children will not be at risk of sexual exploitation, by improving access to education—particularly for girls—and by becoming a strong advocate for the rights of the child.

The work of such nongovernmental organizations and U.N. agencies should be a complement to governments’ actions to solve this problem.

Those actions should include preventing sexual exploitation through social mobilization and awareness building, providing social services to exploited children and their families, and creating the legal framework and resources for psychosocial counseling and for the appropriate prosecution of perpetrators.

The elimination of the sexual exploitation of children around the world is a daunting task but one that is achievable if effective programs are put in place.

Only when this phenomenon is eliminated will we be able to say that the world’s children are exercising their right to a healthy and peaceful life.