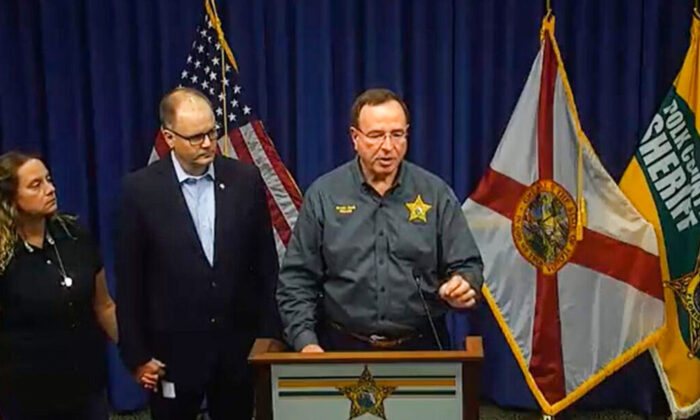 Judd identified them at a press conference, where he displayed their photos and gave a brief description of each suspect. One was a bus driver for the Walt Disney World Resort.

“He was doing this while he was on the clock for Disney,” Judd said. “So if your bus was running late at Disney, he was busy taking pictures of himself and talking trash to what he thought was a little girl.”

On June 2, the Polk County Sheriff’s Office, along with two municipal police departments, began conducting Operation Child Protector II, in which detectives posed as children on social media platforms, popular apps, and online dating sites to investigate those who “prey upon and travel to meet children for unlawful sexual activity.” During the sting, the suspects communicated with and solicited people who they thought were children.

Judd said the investigations are an “ongoing process” but that parents need to be aware.

“We never quit investigating these folks,” he said. “Parents have to understand the first line of defense is at home, so they need to be all up in their child’s business.”

According to a written release, four suspects showed up at an undercover location in Polk County to meet people who they thought were children, with the intent to commit sexual battery.

“Detectives obtained warrants for eight other suspects” who were subsequently “arrested and booked into jails in their respective counties,” the sheriff office’s statement read.

“Additional suspects were charged via a warrant after transmitting pornographic images and/or grooming and soliciting children online—they are still at large in Florida and police are actively looking for them.”

The 12 suspects who were arrested are facing a total of 49 felony charges.

Judd stated at the press conference that some of them “flew under the radar” with no criminal histories.

“What I want parents to understand is these aren’t traditional criminals,” Judd said. “Nine of the 12 don’t have a criminal history. These are evil people lurking online and grooming children online to engage them in sexual conduct.”

The combined criminal histories of the others, Judd said, included 22 felonies and 31 misdemeanor charges. The youngest suspect is 20 years old and the oldest is 67.

Most of the suspects had active warrants, and two men were from out of state—Michigan and Alabama. The latter is 66 years old and works as a Black Hawk helicopter mechanic at Fort Rucker, Judd said.

“He had chats with a 13-year-old while he was at work,” Judd said. “I hope he didn’t get so carried away that he forgot to put all the parts back on the Black Hawk helicopters. That could be a real problem.”

Two of the men are married and told detectives they “waited until their wives were asleep” to go online to talk to children.

Judd had a final message for those who wish to do harm to children: “We are all the time looking for these deviants. So wherever you are in the world, if you’ve been talking nasty and sending nasty pictures to what you thought was a child, we’ll be after you.”