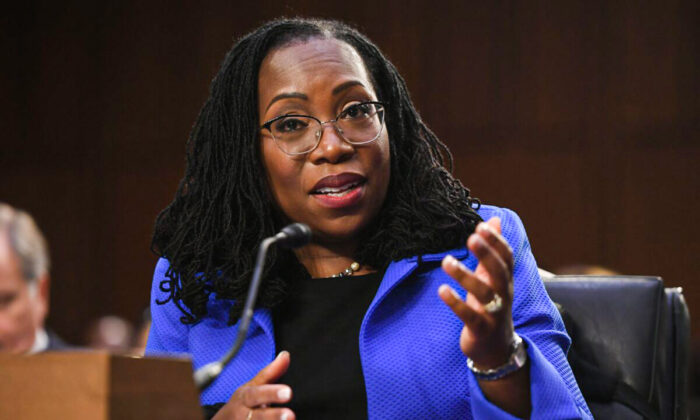 Judge Ketanji Brown Jackson testifies before the Senate Judiciary Committee on her nomination to serve on the Supreme Court, on Capitol Hill on March 23, 2022. (Saul Loeb/AFP via Getty Images)
Viewpoints

With three Republican senators breaking ranks to commit to voting to confirm Ketanji Brown Jackson to the Supreme Court, the controversial judge appears to be on a glide path to becoming the first black woman seated on the high bench. But the scandal of the White House allegedly covering up her judicial record, including the withholding of tens of thousands of pages of documents from Senate investigators, will outlast her appointment.

His May 2021 sentencing also was one of the last cases that came before her bench, making it even more politically radioactive.

As part of the 2018 multistate sting operation targeting Cane and two co-defendants, the feds busted Cane posting files to the internet from a cache of “over 6,500 files depicting children who were elementary school age, middle school, and high school ages, all engaged in sexual acts or posing sexually,” according to the probation officer involved in the case, who recommended that Jackson sentence the defendant to 84 months in federal prison. According to a transcript of the May 2021 sentencing hearing, the officer pointed out that many of the files featured “sadistic and masochistic conduct” involving the underage victims.

An Obama appointee, Jackson disregarded the probation officer’s tough recommendation and sentenced Cane—a junior high school social studies teacher at the time—to the statutory mandatory minimum of 60 months. Her punishment was also below the prosecution’s own recommended prison time; however, it isn’t clear how far below, because the Biden administration has sealed the prosecutor’s sentencing memo in the case.

“The White House is still sealing the government’s sentencing memo—it’s still under seal and it shouldn’t be,” said the investigator close to the confirmation proceedings, who spoke on condition of anonymity. “They are covering it up, along with more than 48,000 pages of other documents, including her pre-sentencing reports and emails.”

Although the White House belatedly unsealed the transcript of Jackson’s sentencing hearing with Cane, almost 20 pages of the document are still blacked out. White House officials didn’t respond to requests for comment.

The full Senate is expected to vote on Jackson’s confirmation to the high court by the end of the week. Her appointment would be for life.

Court records show that Friedman, a Clinton appointee, sent Nickelson away for 180 months, or 15 years, in the federal pen. While Boasberg, an Obama appointee, matched Jackson in giving Blanchard 60 months, the fine print in Jackson’s judgment (pdf) reveals that she made sure that Cane didn’t have to actually serve his 60 months, by giving him credit for time served since he was first incarcerated. The credit shaved almost two years off his prison term. Boasberg, in contrast, handed down a straight five-year sentence with no time served.

Records (pdf) also reveal that Jackson ordered that Cane be housed in a facility that has a “500-hour residential drug abuse prevention program.” Inmates who complete the program are awarded additional good-time credit, further shrinking the amount of time they’re locked up and away from children.

“When she had discretion in sentencing, Judge Jackson always sentenced these monsters to significantly less time than what the federal guidelines recommended—47 percent below the national average for possession and 57 percent below the national average for distribution,” said Davis, who previously served as chief Senate Judiciary counsel for nominations.

At 51, Jackson is relatively young and could have an increasing influence on Supreme Court decisions over time, including ones involving crime and punishment.

Jackson marked the first time the Senate Judiciary Committee deadlocked (11–11) on a Supreme Court nod in the modern history of nominations. Democrats were forced to take an additional procedural step to “discharge” Jackson’s nomination from committee on April 4 in order to advance her to the Senate floor for a final vote later this week.