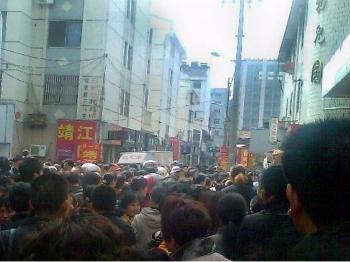 A crowd gather outside a kindergarten where a man attacked and injured 29 young children and three adults in Taixing, eastern China's Jiangsu province on April 29. (AFP/Getty Images)
China

Child Murders in Shandong a Restricted Subject for Chinese Media

Rona Rui
View profile
Follow
biggersmaller
Print
In the afternoon of Aug. 3, a man stormed into a kindergarten in China’s Zibo City, Shandong Province, stabbing to death three children and one teacher, and injuring thirteen others. Information related to the incident on a number of Chinese websites and blogs has been removed, indicating that officials may have attempted to censor the news.

The killings took place at around 4pm in a kindergarten in Zibo’s Boshan District, home to many government offices. The victims were mostly very young children; the director of the kindergarten was among those injured.

Several versions of the story have circulated on Chinese websites, since authoritative information on the subject by major media sources are not available to Chinese mainlanders. One version claims that a teacher was killed in the attack (something also reported by the Western press); another claims that there were three attackers involved (not mentioned by AP or other Western sources); and, according to a doctor from the Zibo Number One Hospital who refused to give his name, four were killed and six were injured, and two children are under intensive care.

Putative eyewitnesses are also filling the informational breach, communicating with the world using electronic bulletin boards. “The scene has been blocked by police. Most of the kids are still inside. Many spectators are outside, including very anxious parents who have not yet seen their kids,” one eyewitness claimant wrote.

It was also rumored that a number of government vehicles were parked outside the emergency room at the local hospital, and that the hospital was mostly closed to the public. The kindergarten target of the attacks is located inside an office compound, among the best in the neighborhood, and as such many of the enrolled children would belong to the families of government employees. Though it is the summer break in China, many children were still sent to the kindergarten because of their parents’ jobs.

After the incident the state run Xinhua was reported to have published a brief statement in English, according to AP. In it the killer was identified as self-employed worker Fang Jiantang, who used a 24-inch knife to do the deed, and whose motive was unknown. Later, however, a search of Xinhua’s main website for all instances of ‘zibo’ yielded zero results, indicating that the official notice may have been withdrawn, too.

Searches in Chinese with phrases ‘Zibo’ and ‘kindergarten’ yield few related news items; upon clicking it is revealed that many of them have already been deleted.

This year there have been several incidents of school and kindergarten killings in China, causing panic and concern among parents and the general public. One of the most serious attacks took place on April 29 in Jiangsu province, involving thirty-one victims, five of who were seriously injured, at an average age of four years old.

On May 12, a kindergarten in Shaanxi province was broken into by a man named Wu Huanmin, who killed five boys, two girls, two adults, and injured eleven using a kitchen knife. Wu later committed suicide. Several more incidents of the kind emerged in succession, and the latest killings in Zibo, uncomfortably for the authorities, fit into the same pattern.

Chinese communist officials claim that censoring such news is for the benefit of the public. After the killings of April 29, however, residents took the risky move of marching on the streets to demand greater transparency from the regime in dealing with such cases.