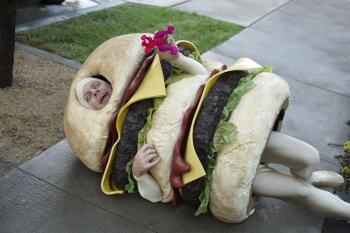 The 'Burger Corp' campaign was launched Friday May 1 via YouTube with a short film entitled 'Sham Burger'. (Courtesy of the Cancer Council)
US

By James Healy
biggersmaller
Print
Childhood obesity has reached alarming levels in Australia with almost a quarter of all children either overweight or obese, according to the latest Australian Cancer Council findings.

With these results placing obesity levels among the highest in the world, Australian health and consumer groups have launched a new campaign called “Burger Corp”, seeking to ban marketing of unhealthy food to children.

The “Burger Corp” campaign was launched Friday May 1 via YouTube with a short film entitled Sham Burger.

Sham Burger is a man dressed up as a cheeseburger who tries to force his way through the front door of a suburban home, asking whether “little Nicholas is in”. The homeowner pushes Sham Burger away despite his offer of a free toy, and the statement is made that “you wouldn’t allow it on your doorstep. Why allow it on your television?”

Other groups behind the “Burger Corp” campaign include Choice, Parents Jury, Coalition on Food Advertising to Children, Obesity Policy Coalition and the Public Health Advocacy Institute of WA.

They estimate that the average Australian child is exposed to 3640 television food advertisements per year, including 2190 for junk food!

The global Brand Child study (Martin Lindstrom, 2003) reported that, on average, children see over 20,000 television commercials a year. “They watch more TV than they actually spend time with their parents,” says Mr Lindstrom. “One out of three kids, the first word they are learning is Coke and not mum and dad,” he adds on his website.

Advertising is deliberately intended to be a persuasive influence, but organisers of the campaign say children do not understand the persuasive intent of advertising, yet they are exposed to around 10 television food ads every day. Almost two-thirds of these are for unhealthy foods.

The campaign calls for Government to place the rights of children and parents above commercial interests, and to develop and enforce meaningful regulations on unhealthy food marketing to children. Their demands include:

The Australian Government regulates advertising to children through the Australian Communications and Media Authority (ACMA) whose current regulations are viewed by health and consumer groups as significantly lagging behind those of other countries. New Children’s Television Standards are expected to be released in the next few months.

The view of the Australian Psychological Society, the professional body for registered Australian psychologists, is that:

“The strategies most likely to reduce levels of food-related harm – such as increased regulation – are often more politically challenging, complex and expensive. However, real results can only come from integrated approaches that address such challenges.”

The “Burger Corp” campaign also raises broader ethical questions of whether children are an appropriate target audience for any form of advertising. Is it indeed ethical at all to try and persuade and influence children for commercial gain?

According to community based children’s media watchdog, Young Media Australia, “tweens” (8 to 14 year olds) are regarded by many in the advertising and media industries as a legitimate and valuable target audience. They not only have their own spending power, but are recognised as having a major influence on their parent’s purchasing decisions

“Children are effective influencers of family purchasers, pestering their parents to buy products that they neither need nor really understand.  Advertising pressures can produce significant conflict between parents and children. Many vulnerable families succumb, spending dollars they can least afford. Pester power often works,” YMA said on its website.