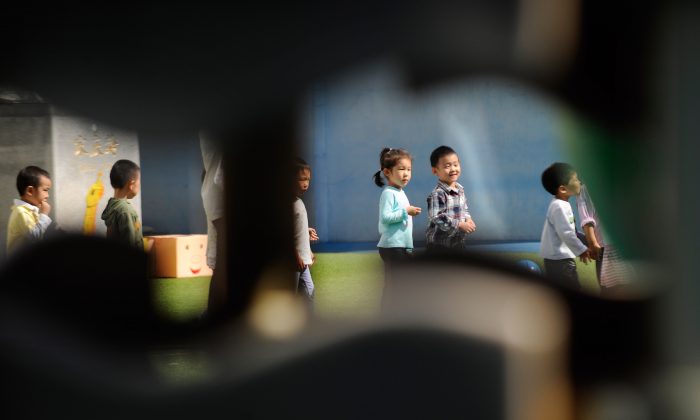 Children attend kindergarten in Beijing on Sept. 19, 2012. A recent spate of stabbings and killings in Chinese schools has led to deep questions about the prevailing value system, which experts say has been undermined by Communist Party policies. (Wang Zhao/AFP/Getty Images)
China

In April, a 19-year-old was set upon and stabbed seven times in the lower back and legs by three fellow students—for “swaggering.” It took place in Shaanxi Province, and within weeks two more incidents were registered there: one student had his throat slit and died, while another was stabbed (and survived), in two different counties. Just days after the first incident, a 15 year old was stabbed to death in a high-school corridor in Jiangxi Province. The most horrifying incident emerged in the press around this time: the decapitation and dismemberment of a 12-year-old girl, by a girl of the same age, a year previously, in the southern province of Guangxi. The motive was jealousy.

The series of brutal incidents across China, experts say, are partly the symptoms of an educational system that prioritizes competition and academic performance, at the expense of values, ethics and morality.

The way that secondary and elementary school students increasingly respond to problems in their life, including mere annoyances, with violence, is a trend that has both experts and citizens alarmed.

Cases of murder and suicide on universities campuses appear regularly in the Chinese press, to some degree the result of intense pressure from career prospects, graduate studies, and relationships, the reports say.

According to a psychological survey of college students by the Chinese Society Research Institute, only 6.3 percent have a clear goal for the future, and define themselves as “confident.”

The attacks are a reflection of a “disregard for human life” that pervades Chinese society, according to Chu Zhaohui, a researcher with the National Institute of Education Sciences, speaking to the South China Morning Post.

Since the takeover of China by the Communist Party in 1949, little respect has been paid to the value of life, he says, pointing out the mass violence and death in the Party’s political campaigns like the Cultural Revolution beginning in the 1960s.

Classified official statistics showed that nearly two million Chinese died as a result of state-sponsored killings and another 125 million were either persecuted or “struggled against” during the Cultural Revolution, when public executions were commonplace and widespread, according to researcher Song Yongyi.

“This has formed an atmosphere in which human lives are worth very little,” Chu said.

Eric Chui Wing-hong, an expert on youth crime at the University of Hong Kong, points to the education system as a major cause for the problem.

Again it is the lack of moral education, and a relentless focus on pleasing Communist Party edicts, that has created a bereft culture, he told the South China Morning Post. “School administrators are inclined to follow party officials hell-bent on burnishing schools’ academic credentials and reputations.”

He added: “This often results in way too much homework and neglecting the need to develop healthy personalities.”

Chinese have thus come to value “success” more than moral education, says Xiong Bingqi, deputy director of the 21st Century Education Research Institute, a program at the University of Hong Kong. Speaking to Chinese state media about the university murders, he said: “Our education focuses too much on professional education and ignores moral education. If a student lacks an understanding of their duties to society, he or she might use extreme methods to solve some difficulties in life.”

Across the country, citizens react to the reports of student violence, one after another: “Is there no end to these deviated people? This is really a profound social issue,” commented Shanxi netizen ‘Can Lan Ren Shen Zai Lu Shang’ on Weibo, the nationwide social media, echoing the feelings of other Internet users.

A Shanghai netizen replied: “There is no feeling of security at all in such a chaotic country.”

Chu Zhaohui, told the state mouthpiece Guangming Daily that behind the murders, “the root cause is almost the same: that is, some people lack a sense of respect for life… This lack of respect for human life is becoming a growing social issue that we can’t continue to ignore.”