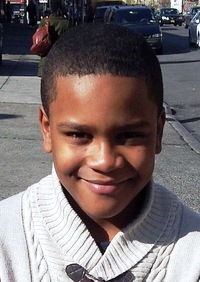 Police are looking for Zhaundu Bradley, 9-year-old boy who went missing Tuesday afternoon, not returning home from his after-school program.

He was last seen at 3:30 pm at the Boys Club of New York at East 111th Street. He was wearing black sneakers, red basketball shorts, gray T-shirt with the word “Fitch” on it in white,  and a blue athletic sleeve on his right arm.

“Zhaundu does not reside in the city and is unfamiliar with the area. He may be riding a silver scooter,” police stated.

Police described him as being 5 feet, 3 inches tall, with brown eyes, glasses, and black hair.

The article has been updated to reflect a new description released by the New York City Police Department.