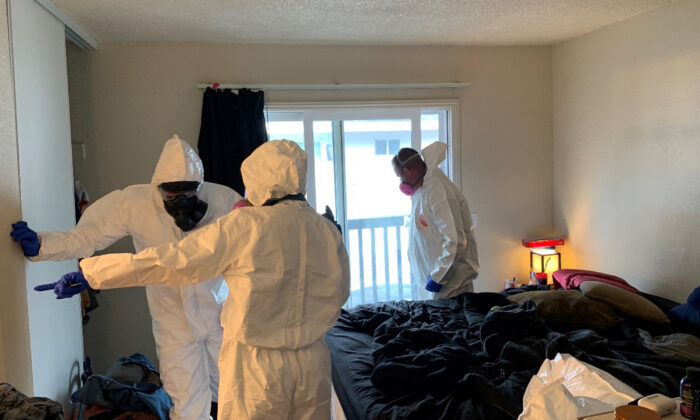 Investigators collect evidence from the home of Evan Frostick, 26, and Madison Bernard, 23, the parents of a 15-month-old toddler found unresponsive in a bedroom in Santa Rosa, Calif., on May 9, 2022. (Santa Rosa Police Department via AP)
Northern California

SANTA ROSA, Calif.—The parents of a 15-month-old toddler were arrested for her death after the child was found unresponsive in their Northern California home where police found drug paraphernalia and fentanyl, authorities said.

Authorities may file manslaughter charges based on the results of an autopsy and toxicology test on the toddler expected in the next few weeks, he said.

Mahurin said he didn’t know if the child’s parents have retained attorneys to speak on their behalf. They are scheduled to be arraigned later Wednesday and could be assigned a public defender if they can’t afford an attorney, he said.

“The main concern was that the toddler was in a bed and in a bedroom that had both paraphernalia for fentanyl and fentanyl in the room and sprinkled on the bed,” he said.

After serving a search warrant, detectives found 2.5 to 3 grams of suspected fentanyl and paraphernalia in a bedroom, including on the bed the child shared with her parents, and on the floor where the child often played, Mahurin said.

“Anything from 2 milligrams or more can be considered a lethal dose so, having that much just lying around can be incredibly dangerous,” he said.

Mahurin said there is a growing concern about children being exposed to fentanyl, a powerful synthetic opioid used for pain relief that has been blamed for a spike in San Francisco Bay Area overdoses.

In 2019, Patrick O’Neill, 29, and his 13-month-old son, Liam, died of fentanyl overdoses. Federal prosecutors charged three people with the distribution of fentanyl in relation to the deaths and linked the drugs to a network of dealers in San Francisco’s Tenderloin neighborhood. They were sentenced to between six and eight years in federal prison.