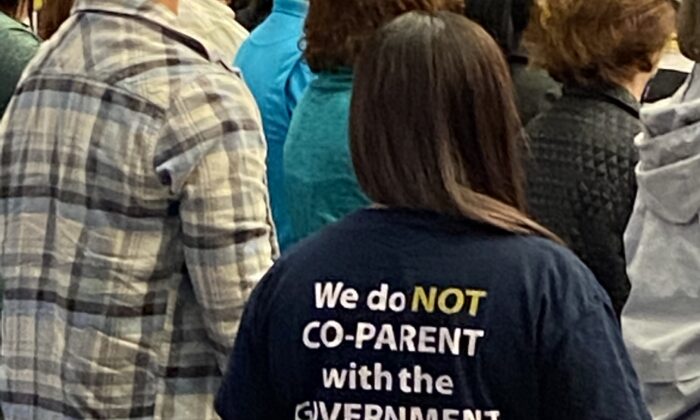 A Flagler County parent makes her feeling clear on the subject of who is in charge when it comes to the children as she observes proceedings at a Nov. 16, 2021, school board meeting. (Patricia Tolson/The Epoch Times)
Florida

'Why is Speaker of the Florida House Chris Sprowls and Senate President Wilton Simpson unsupportive of parental involvement in education and protection of our children?'
By Patricia Tolson

As time runs out on the legislative calendar, a child advocacy group is pleading with Florida lawmakers to pass two bills designed to protect public-school children from “sexually explicit material and age-inappropriate gender indoctrination.”

In an open letter to State House Speaker Chris Sprowls (R-Fla.) and state Senate President Wilton Simpson (R-Fla.), the Florida Citizens Alliance (FLCA) asks the lawmakers: “Why have you decided NOT to protect our public-school children from sexually explicit material and age-inappropriate gender indoctrination of Florida’s young children?”

“We’ve always prided ourselves on having solutions rather than just complaining,” Keith Flaugh, managing director of Florida Citizens Alliance told The Epoch Times. “So during the 2022 legislative session, we got a Harmful for Minors bill filed in both chambers of the Florida legislature.”

SB 1842 also contains a very strong parental opt-in, putting parents in control of what sexually explicit and age-inappropriate materials their children are exposed to.

“We were sure up until about two weeks ago the bills would be heard,” Flaugh said. “Two weeks ago, I was told the House bill was not going to move because Rep. Vance Aloupis wasn’t going to hear the bill based on direction from above. So that’s what motivated us to put the open letter out. So, we decided to call out Rep. and House Speaker Chris Sprowls (R-Fla.) and Senate President Wilton Simpson (R-Fla.).”

According to Flaugh, FLCA has been fighting to protect children from sexually explicit materials for over 6 years. “When confronted with the materials, almost every legislator, regardless of party, readily admit many of these should not be in public schools,” Flaugh said. “Yet leadership fails to have the courage to act. Several sheriffs have indicated that if you or I were to go on school property to distribute some of these, we would be arrested for distributing child pornography or child abuse. Yet there has been little or no action by the legislature, most Sheriffs, or State Attorneys.”

Three years ago, FLCA filed a public records request in 25 Florida counties seeking to know which of the books on the list schools used as textbooks or had in their libraries. Of those, 12 forwarded the requested information and 13 ignored the request. However, FLCA didn’t have the financial means to pursue legal recourse. Enter Pacific Justice Institute (PJI).

As reported by The Epoch Times on Aug. 2, PJI reached out and offered to represent FLCA on a pro-bono basis. PJI attorney Alexander Bumbu filed another public records request. This time, to all 67 Florida counties. Of those, only Broward County refused to comply. After a six-week-long legal back and forth, PJI sued Broward County and within two weeks, Broward capitulated. According to the new information gathered through the more expanded public records request, over 20 of the 67 Florida counties admitted to having over 50 percent of the books on the FLCA’s 2021 Objectionable Materials Report.

This report contains objectionable and potentially offensive material. It is intended for adults and for educational purposes only. Please keep this report away from minors and avoid indiscriminate distribution. If you are sensitive to such material and do not wish to be exposed to it, please do not read the report.

While one must confirm they “are not a minor and will not distribute to minors,” in order to read the report or access any of the links to the books within, Flaugh said these sexually explicit and age-inappropriate materials are prevalent in Florida’s public schools and available to children as young as five and six years old.

While some of the LGBTQ-focused novels are being utilized in elementary schools, a majority of them are targeted at pre-kindergarten children, and thus FLCA has no avenue for confirming their use. These books, which are promoted to children ranging from ages 12 months to eight years, promote gender self-identification and same-sex marriage; this endorsement violates Florida’s Constitution and infringes upon the rights of its citizens, the FLCA concluded in its report. All of the novels in question contain indecent and offensive material.

Ironically, parents who have attempted to read excerpts from these books at school board meetings—that the schools place in the hands of children—have been told it’s not appropriate because children may be listening. Some school board members have ordered police to remove these parents from the chambers.

One book on the Objectionable Materials Report “It’s Perfectly Normal” by Robie H. Harris, discusses being gay, bisexual, and transgender and describes in detail how a man and woman, two women, and two men engage in sex acts. An FLCA assessment of the book shows it contains sexually graphic drawings, detailed how-to instructions, and discussions on how perfectly normal it is for children to masturbate. It targets 10-year-olds. Overtly graphic drawings depict the male and female genitalia and people engaged in sex acts. One drawing shows a young, naked female bent over, holding her ankle with one hand while holding a hand mirror between her splayed legs with the other to examine herself.

Florida has obscenity laws, FS 847.012 and FS 847.001, that make it a third-degree felony to distribute “any book, pamphlet, magazine, printed matter however reproduced” that contains “explicit and detailed verbal descriptions or narrative accounts of sexual excitement, or sexual conduct and that is harmful to minors.”

Florida also has the third-highest rate of sex trafficking in the nation. According to the Crimes Against Children Research Center at the University of New Hampshire, 93 percent of boys and 62 percent of girls are exposed to pornography before age 18. Children who view pornography frequently disengage from their family and start to isolate more and often become withdrawn, sullen, or depressed. Many argue school districts should not be aiding and abetting these sexually explicit materials in public schools.

In October of 2021, more than 100 people were arrested in Bartow following a human trafficking investigation where child predators were attempting to arrange sex with minors online.

On Feb. 16, two women and a man were arrested in Orlando for trafficking at least three teens ranging in age from 15 to 16 years old, for sex acts at several hotels.

Parents and Advocates Speak Out

As a mom to four children, Jamie Merchant of Lee County was extremely supportive of HB 1305 “Harmful for Minors.”

“I feel that today’s society is rushing to turn our children into adults,” Merchant told The Epoch Times. “I feel that requiring parental involvement in education could only become beneficial in preserving the innocence of our children. Parents should be able to access materials and curriculum without having to jump through dozens of hoops provided by the school districts, and be able to opt-in, not opt-out, of certain classes, like sexual education and reproductive health.”

For the last seven months, Merchant has been part of several book and curriculum reviews for the School District of Lee County and sees firsthand the access her own children have to materials she feels may be inappropriate for their age group.

“The fact that this bill and the Senate comparison Bill SB 1842 have not made it through committees is worrisome,” Merchant asserted. “Why is Speaker of the Florida House Chris Sprowls and Senate President Wilton Simpson unsupportive of parental involvement in education and protection of our children?”

“Keith Flaugh and his team have done outstanding work over the past decade to protect children and defend parental rights,” Petersen told The Epoch Times. “We support his efforts, and we sincerely hope that our state legislators will consider these two bills. They would provide transparency regarding issues that we believe are the parents’ responsibility in educating their children. Schools are overreaching by automatically opting children into programs without parent awareness or consent. These issues are seen across America and many parents are starting to question the education system. These laws will assure that our children are safeguarded from any nonessential curriculum or theories that undermine moral standards and beliefs of the parents. These laws will also be a step towards renewing faith in our education system.”

“In exploring what happens with sex trafficking and how they groom children,” Lamson told The Epoch Times, “we need to make sure there is no encouragement of the sexualization of children in the classroom. We know it’s going on. We’ve seen the books. It’s a sad affair when you have any books that are sexually oriented. They are being prepared to be trafficked with age-inappropriate and pornographic content and the trafficker’s grooming jobs are becoming so much easier.”

Unfortunately, “it’s too late to get the bill scheduled in committees in the House,” Flaugh lamented. “They’re not permitted to meet after week six so there’s no way for the bill to be heard in the House now. The only way forward is to convince Sprowels and Simpson to put the bill into either a committee bill or to amend it to an education bill that’s moving through the legislature. That’s the only way forward.”

The Epoch Times reached out to Sprowls and Simpson for comment.