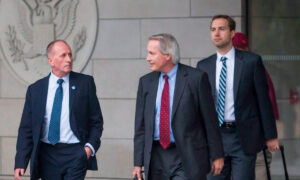 A 2-year-old child in Pennsylvania suffocated to death after his parents allegedly covered his crib with a mattress and weighed it down with two 50-pound bags of driveway salt, it was reported Tuesday.

Justin Joseph Dwyer, 29, and Courtney Stash, 28, were arrested and charged Wednesday with involuntary manslaughter and aggravated assault, among numerous other charges, PennLive reported.

Police were called to the couple’s Myerstown home on April 25 after Stash found one of their triplet sons, Eoin, unresponsive inside his crib.

“This was a tragedy and an accident,” Greer Anderson, an attorney for Stash, said. “We don’t think there is basis for criminal charges. The truth will be borne out.”

But detectives told The Associated Press that the Myerstown couple was weighing down the mattress with two 50-pound bags.

Police said that they didn’t mention the bags to officials when they were questioned.

A 8-year-old boy told police that his mother and step-father “routinely” used a mattress with a blue “Toy Story” bed sheet and the bags to cover the boy’s crib so he wouldn’t climb out, WGAL reported.

Lebanon County district attorney Dave Arnolds told WGAL that he “got himself trapped with this contraption” and suffocated.

Dwyer and Stash are being held at the Lebanon County prison on $250,000 bail each, Fox News reported.

Other details in the case were not immediately clear.

Charges were filed against the pair Tuesday, and no court dates were set at this time. Court records do not show an attorney.