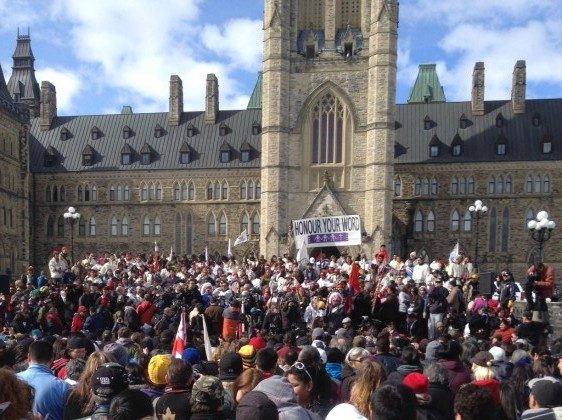 Hundreds of supporters gather on Parliament Hill to welcome the Journey of Nishiyuu walkers—7 young Cree men who trekked 1,600km from their remote village to Ottawa to call attention to aboriginal issues. (Jode Kechego)
Americas

The Grand Council Chief of the Anishinabek First Nation has joined the chorus of criticism directed at Prime Minister Stephen Harper for choosing to greet a pair of newly arrived pandas from China rather than welcoming Cree youth who walked 1,600 km to bring attention to aboriginal issues.

Dubbing the walk “The Journey of Nishiyuu” which translates to “The Journey of the People” in Cree, the youth called for unity among First Nations while hoping to draw support for the Idle No More movement.

Along the way the group picked up hundreds of supporters, many of whom arrived with them at Parliament Hill on Monday.

“We owe a great deal of gratitude to these young people who have inspired us with their determination, while we face a government that simply refuses to consult with First Nations people on ways we can work together to make the future better for everyone in Canada,” Patrick Wedaseh Madahbee, Grand Council Chief of Anishinabek Nation, said in a statement.

“As I understand it, the prime minister was invited to greet the walkers just outside his office on Parliament Hill, but he chose to spend taxpayers’ money to fly to Toronto and have his picture taken with Panda bears from China.”

“What will it take? How many more kilometres need to be walked for this Conservative government to listen to First Nations people?” Ashton said.

Others picked up the refrain on social media.

“How long did these pandas have to go on a hunger strike to have Harper fly down to meet them in person,” tweeted Twitter user Eric Ritskes, referring to Attawapiskat Chief Theresa Spence’s six-week hunger strike in an effort to force Harper to meet with her.

‘I’m going to be listening’: Velacourt

Trudeau met with some of the trekkers, as did Aboriginal Affairs Minister Bernard Valcourt, who has accepted an invitation to visit the Whapmagoostui First Nation this summer.

“I’m going to be listening,” he said in the House Monday before meeting with the youth. “This is about informing myself about their concerns.”

When they arrived at Parliament the group of walkers were greeted by Green Party leader Elizabeth May, NDP leader Tom Mulcair, National Chief of the Assembly of First Nations Shawn Atleo, and Chief Spence, whose hunger strike inspired the walkers to embark on their difficult trek.

Charlie Angus, the NDP MP who first alerted the country to shocking conditions in the Cree community of Attawapiskat on his blog, was also in attendance.

“It says a lot that Stephen Harper isn’t here, that he’s greeting the pandas,” Elizabeth May told the Canadian Press Monday. “It says a lot that we need to move heaven and earth to meet First Nations on a nation-to-nation basis with respect.”

In a speech marking the panda’s arrival at Toronto’s Pearson airport Monday, Harper stressed the importance of Canada’s economic relationship with China, while saying the animals are a symbol of peace and friendship.

“Canada and China are strategic partners. We enjoy an active economic relationship and strong people-to-people ties,” he said.

“Over the coming years, these pandas will help us learn more about one another, while serving as a reminder of our deepening relationship, a relationship based on mutual respect and growing collaboration.”