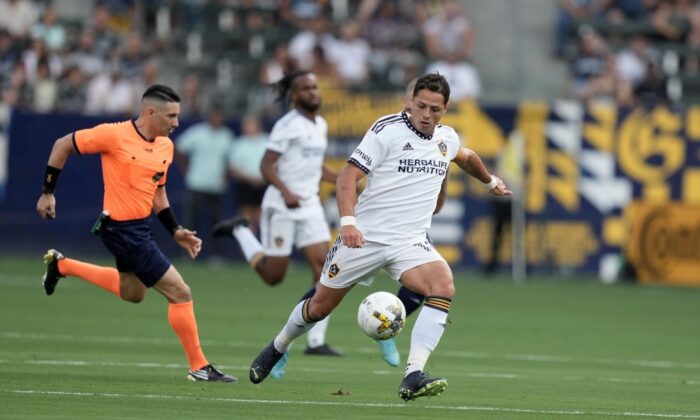 Javier “Chicharito” Hernandez scored twice—including a game-tying penalty kick in the 88th minute—to give the Los Angeles Galaxy a 2–2 draw with visiting Sporting Kansas City on Sept. 4 in Carson, Calif.

The result is likely bittersweet for the Galaxy, however, because Chicharito had a chance to win the game in stoppage time.

In the 97th minute, he lined up for another penalty kick after an SKC hand ball, but SKC keeper John Pulskamp easily saved the soft right-footed attempt.

Chicharito scored early and late, netting his first goal of the night in the fourth minute to open the scoring for the Galaxy (11–11–6, 39 points).

His final score ultimately gave the Galaxy a point and kept the club’s hopes alive for a bid to the MLS playoffs. They are three points behind Salt Lake and Portland, which are tied for sixth place and the final two playoff berths.

The draw extended the Galaxy’s unbeaten streak to five matches (2–0–3).

Los Angeles carried its 1–0 lead well into the second half, but wound up trailing when SKC (8–15–6, 30 points) scored twice within nine minutes.

Their first goal came in the 67th minute, via a penalty kick from Johnny Russell after the Galaxy were whistled for a hand ball in the box.

SKC then took the lead in the 76th minute, when William Agada flicked a ball forward to Felipe Hernandez.

Hernandez ran onto it untouched and carried it into the box before unleashing a right-footed shot that bounced off a Galaxy defender and into the back of the net.

After SKC was whistled for a penalty in the 87th minute—following a foul in the box by Pulskamp—Chicharito lined up from the spot and launched a hard shot into the upper-left corner of the net for the equalizer and his 14th goal of the season.

The Galaxy controlled 60.1 percent of possession in the game and put 5 of 11 shots on frame.

Chicharito’s goal in the fourth minute was his 200th of his club career, which has included stints with Chivas, Manchester United, Real Madrid, Bayer Leverkusen, West Ham, and Sevilla.