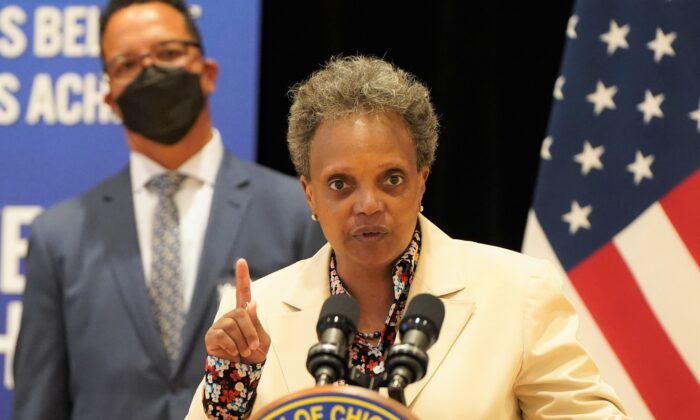 Lightfoot made reference in her greeting to the seven guiding principles of Kwanzaa while her city was suffering yet more violence. If applied, those principles would allegedly lead to a better world—even a better Chicago. The names of the festival and its seven associated principles are Swahili words, Swahili being the beautiful language of much of East Africa and the lingua franca of extensive parts of Central Africa.

The seven principles of Kwanzaa owe much to the ideology of Julius Nyerere, the man who served as president of Tanzania for a quarter-century after it gained independence from Britain. Nyerere was the darling of the European left for a long time. He also reduced his country to an incredible state of beggary such that, although 90 percent of the population worked on the land, it couldn’t feed itself without foreign aid—more foreign aid than was received by any other country in Africa. I lived there for three years and then left to cross Africa from Zanzibar, Tanzania, to Timbuktu, Mali, by public transport.

To be fair (which I don’t always find it easy to be), Nyerere wasn’t the worst of the first generation of African dictators. Although he was ruthless in suppressing opposition and introduced an oppressive and economically disastrous totalitarian system, he wasn’t a tribalist (which would have been impossible in any case because there were no would-be dominant tribes in his country), and he didn’t indulge in any of the more bizarre and terrible activities of Africa dictators such as Idi Amin, Sekou Touré, or Jean-Bédel Bokassa.

Nyerere learned his socialism of the Fabian variety at Edinburgh University. Then—according to Oscar Kambona, his exiled former associate and foreign minister, who fell out with him over the imposition of a one-party state with which he strongly disagreed—he became a Maoist on an official visit to China, where he was welcomed by vast dragooned crowds chanting his praises. This turned his head.

At any rate, he began to herd the peasantry of Tanzania into collective villages, known as “ujamaa” (brotherhood) villages. The results were catastrophic: Not only were about 70 percent of the population moved by various degrees of force and coercion from where they had been living, but agricultural production in the country began its long decline.

Practically all commercial farming, the country’s only source of foreign currency to pay for imports, was abandoned, and famine was averted only by foreign aid, principally from Scandinavian countries, which subsequently recognized that they had, in effect, subsidized a great crime.

In ujamaa villages, Nyerere instigated the 10-cell system. Every 10th household had a party member (the party of the Revolution) whose permission was needed for any small privilege to be wrested from the authorities and who, in effect, acted as a government spy.

Needless to say, this resulted in a swamp of corruption and blackmail, such that, in a country never far from hunger, party members could be recognized by their girth. The whole system was prevented from being horrific only by incompetence and the generally delightful and pacific nature of the Tanzanian population.

Ujamaa is one of the principles lauded by Lightfoot. It’s a moot question whether it would be worse before doing so if she knew what ujamaa meant in reality than if she didn’t.

Another of the principles of Kwanzaa is “uhuru,” or freedom. Freedom in Tanzania had little recognizable meaning. Only governmental incapacity or incompetence, and a certain laudable lack of ruthlessness by comparison with other dictatorships, prevented freedom from being extinguished altogether.

It was certainly not from any official attachment to freedom that there were worse places in this respect than Tanzania. Nevertheless, Nyerere imprisoned thousands of people without trial for political reasons.

“Umoja,” unity, is another of the Kwanzaa principles that Lightfoot lauded as a peculiarly African virtue. Let me recall a few things about my journey across Africa, during which I saw the continent from the bottom up.

In Rwanda, every person was a member of the sole political party from birth. A few years later, there was to be a genocide in which about 800,000 people were slaughtered by their neighbors, among others.

Naturally, some people blame the colonial legacy for this, even though the country had been independent for a third of a century. Moreover, you can lead a man to a machete without making him use it to commit genocide.

South of Rwanda—and in many respects, a mirror-image of that country—was Burundi, where, in 1972, every Hutu with a secondary education or above was massacred, totaling between 100,000 and 200,000 people.

In Equatorial Guinea, the first president, who was elected democratically, had caused a third of the population either to be killed or to flee into exile. And 30 years later, much of my journey would have been too dangerous to make because of civil wars.

The war in the eastern Congo is estimated to have caused 3 million deaths. Northeastern Nigeria has been made impassable by the Islamist terrorist movement Boko Haram (which has since been succeeded by the Islamic insurgency in West Africa), though at the time I had no inkling of the future. Mali has likewise become impassable because of such factional fighting. So much for umoja.

I draw attention to all of this not because I think Africa is worse than anywhere else. Alas, similar things could be recounted about most regions of the planet. I wish to merely point out the fatuity of the seven principles of Kwanzaa, which are supposedly characteristic of something called African culture.

But even to use the term African culture is indicative of a complete absence of real interest in Africa. Africans of East and West Africa are no more alike than are, say, Albanians and Swedes; indeed, West Africans aren’t all alike in culture or philosophy of life.

Lightfoot’s use of Kwanzaa and its supposed seven principles deriving from African culture is purely demagogic, a tool of political entrepreneurism and rent-seeking—a tool that she’s using while ignoring problems such as the drive-by shootings that are her responsibility to solve.