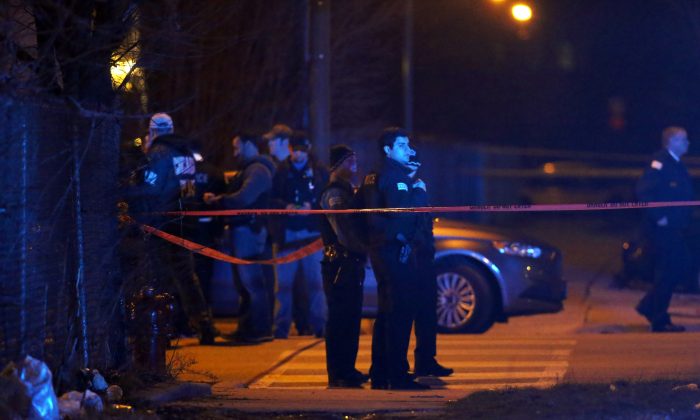 (Nuccio DiNuzzo/Chicago Tribune via AP)
US

At least eight people were killed in shootings across Chicago over the weekend, according to the Chicago Police Department.

From Friday, Sept. 9, until Monday, Sept. 12, a total of 41 people were shot, including 33 nonfatal shootings, police told ABC7.

The latest homicide occurred at 2:15 a.m. on Monday in the East Garfield Park neighborhood on the West Side, said police. In that incident, police responded to a call of a man who was shot in the legs, neck, and abdomen on West Monroe. The unidentified man was pronounced dead at the scene.

On Sunday night in the Brainerd neighborhood, a shooting at a vigil for a man who was recently shot and killed left an 18-year-old woman dead. Three people were shot in total, including two teenage boys, officials said. The 18-year-old woman was pronounced dead at the scene. In the incident, a group was standing at the vigil before a minivan pulled up, with two people getting out and opening fire on the group.

The vigil was being held for 23-year-old Nahmar T. Holmes, who had been shot and killed outside his home on Saturday, police told ABC7. Two people walked up to him and opened fire, hitting him in the torso. He died 19 minutes later at South Shore Hospital, and police described the shooting as likely gang-related.

On Sunday afternoon in the Hermosa neighborhood, police said that Sergio Zaragoza, 28, got into an argument with a woman. The argument then got physical. During the altercation, another male approached the two and shot Zaragoza in the chest, police said. He was taken to Mount Sinai Hospital, where he was pronounced dead at 3:47 p.m. Police told ABC7 the violence likely stemmed from a domestic disturbance.

Four other people were gunned down during the weekend.

According to reports, 2016 is set to be among the worst for homicides in Chicago’s recent memory. Well over 500 people have been killed in the first nine months of this year—eclipsing the past four years for recorded murders, according to local media outlet DNAInfo, which has kept tally of the city’s homicides. About 494 people were killed in all of 2015, 427 were killed in 2014, 422 were murdered in 2013, and 2012 recorded 509 homicides.

Dean Angelo, president of the Chicago police, said he believes the city’s situation is going to get worse before it improves, according to an interview with the Wall Street Journal. “There is no way out of this shooting spree,” Angelo said.

During Labor Day weekend, 13 people were shot and dozens more were injured. The bloody weekend capped off a very violent August that saw 92 homicides—the most in a single month since August 1993, according to USA Today.

The newspaper noted that in Chicago, the remaining three months of 2016 will undoubtedly produce more death.

“The city is on pace to record well over 600 murders for 2016, a threshold it has not reached since 2003. In the 1990s, in the midst of gang violence driven by the crack-cocaine epidemic, Chicago regularly recorded more than 700 murders per year.”