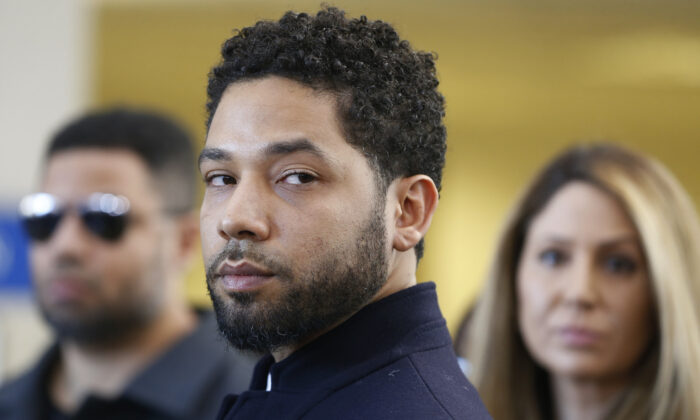 Actor Jussie Smollett after his court appearance at Leighton Courthouse in Chicago on March 26, 2019. (Nuccio DiNuzzo/Getty Images)
Crime and Incidents

Chicago to Still Go After Jussie Smollett for $130,000 in Police Costs: City

The city of Chicago confirmed it will continue to pursue a lawsuit against actor Jussie Smollett, who was convicted last week on multiple felony charges stemming from a hate crime hoax in early 2019, in a bid to collect more than $100,000 in costs that were incurred by the city’s police department.

A jury found Smollett, who appeared in “Empire,” guilty on five of six charges during his trial on Dec. 9.

After the guilty verdict was handed down, the city of Chicago confirmed to news outlets on Dec. 10 that it would seek to recoup its losses.

“The City filed a civil lawsuit against Jussie Smollett to recover costs incurred by the Chicago Police Department investigating what the City believed to be Smollett’s false police reports that he was a victim of a hate crime,” the city’s statement, dated Dec. 11, reads.

“While using a different standard of proof, the jury’s finding of guilt convicting Jussie Smollett of criminal charges stemming from the incident confirms that the City was correct in bringing its civil lawsuit.

“The City intends to continue to pursue its lawsuit to hold Smollett accountable for his unlawful actions and to demand that he compensate the City for costs incurred by the Chicago Police Department which took his false claims of harm seriously.”

Chicago officials didn’t respond to a request by The Epoch Times for additional comment by press time.

In 2019, the city of Chicago filed a civil action against Smollett, 39, after he refused to reimburse the department for about $130,000 after its two-week investigation into the hoax. Smollett has long said the incident wasn’t fabricated and pleaded not guilty at trial, although two Nigerian brothers who said they took part in the hoax said in court earlier this month that Smollett was the mastermind.

Smollett was found guilty of five Class 4 felonies for telling police officers and detectives a series of lies from the hoax that he attempted to blame on supporters of former President Donald Trump. In Illinois, a Class 4 felony carries a maximum prison term of 3 years.

A lawyer for Smollett, Nenye Uche, said the former actor is planning an appeal.

Abimbola “Abel” Osundairo and Olabinjo “Ola” Osundairo, the two Nigerian brothers, filed lawsuits against Smollett in 2019 and accused him of defamation.