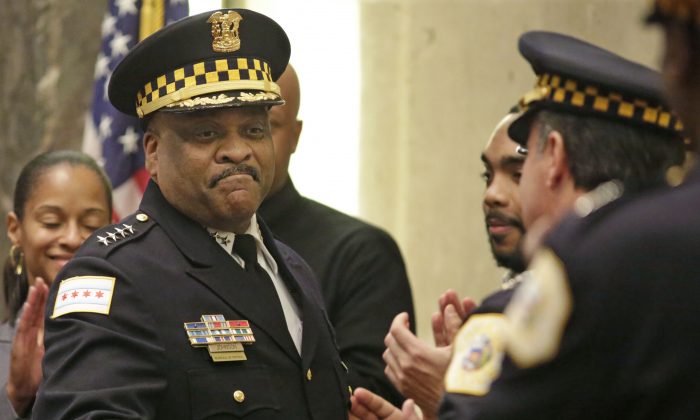 Chicago to Add 970 New Police Positions Over Next 2 Years

CHICAGO—Chicago’s police department will add nearly 1,000 new positions over the next two years, a move that comes as the city deals with a dramatic increase in shootings and homicides and battles financial woes that threaten basic services.

Superintendent Eddie Johnson will announce what will be the force’s largest hiring effort in years at a news conference later Wednesday, CPD spokesman Anthony Guglielmi said.

The breakdown is 516 new officers, 92 field-training officers, 200 detectives, 112 sergeants and 50 lieutenants, Guglielmi said. An official told The Associated Press on Tuesday the department, which has more than 12,000 officers already, planned to hire another 500-plus.

Among the biggest questions is how the financially strapped city will pay for a massive hiring effort that’s likely to carry a multimillion-dollar price tag. Mayor Rahm Emanuel’s office did not immediately return an email requesting comment about the cost of pensions and benefits that will come with so many new hires.

The move also is a departure from how Emanuel has handled staffing at the department during his tenure, resisting pressure to add to the department’s ranks and instead paying thousands of dollars in overtime.

Chicago has seen a dramatic rise in the number of shootings and homicides this year. In August alone, there were 90 homicides, marking the first time in two decades there’ve been that many in a single month. Overall, the city has recorded more than 500 homicides this year—higher than all of 2015—and is on pace to climb past the 600-homicide mark for the first time since 2003. There have also been more than 2,500 shooting incidents so far this year, about 700 more than in the same time period last year.

The high use of overtime payouts is something Emanuel and the police superintendent he hired when he took office in 2011, Garry McCarthy, forcefully defended, saying the cost—about $100 million annually in recent years—was a less expensive way to keep more officers on the street. But according to a recent Chicago Sun-Times report, there are fewer officers because police retirements have outpaced hiring by 975 officers.

Plus, the department that’s long struggled with a reputation for police misconduct and brutality has been beset by criticism and an erosion of trust in the wake of several fatal police shootings.

Last year, the city was forced to release a video of a white officer fatally shooting black 17-year-old Laquan McDonald in 2014, sparking major protests as well as federal and local investigations. And there have been signs that the department has had a difficult time keeping up with the crime — starting with the fact that the percentage of homicides that detectives have been able to solve has dropped significantly.

The fallout over the video prompted Emanuel to fire McCarthy at the end of last year. Interim Superintendent John Escalante and his permanent replacement, Johnson, have struggled to bring the violence under control. During that time, the call for more officers in several city neighborhoods and from aldermen has only gotten louder.