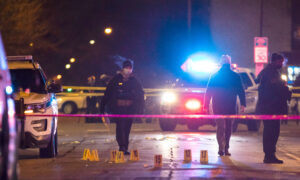 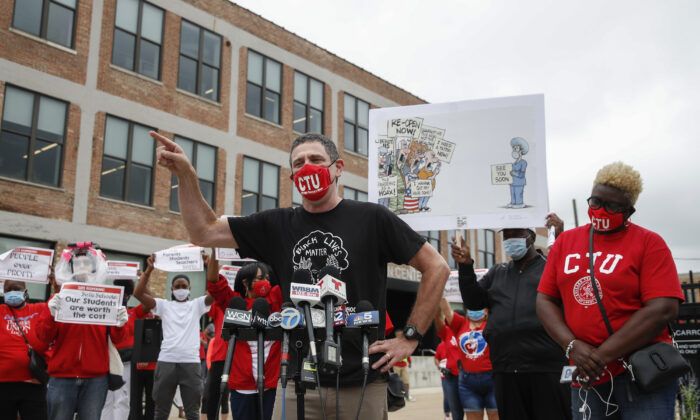 Chicago Teachers Union President Jesse Sharkey speaks prior to a protest over the city's school reopening plan in Chicago, Ill., on Aug. 3, 2020. (Kamil Krzaczynski/AFP via Getty Images)
US News

Thousands of Chicago’s public school teachers on Monday refused to return to classrooms, halting the effort to bring back in-person learning to the city.

The move comes after the Chicago Teachers Union (CTU) announced over the weekend that its members have voted to defy the Chicago Public School’s (CPS) reopening plans and continue to work virtually out of their online classrooms.

The CPS, which serves over 355,000 students, originally planned to reopen K-8 schools on Feb. 1 for an estimated 71,000 children in those grades who wish to return for in-person instruction. Some 10,000 K-8 teachers and staff members were ordered to return to prepare for the reopening.

In a statement announcing the vote results, the CTU said 71 percent of its voting members were in favor of a resolution that rejects the district order. About 86 percent of the union’s 20,000 members participated in the vote.

“So what does this mean? It means the overwhelming majority of you have chosen safety,” said the CTU, which which has been urging its members to stay away from schools since the early days of the CCP (Chinese Communist Party) virus outbreak . “CPS did everything possible to divide us by instilling fear through threats of retaliation, but you still chose unity, solidarity and to collectively act as one.”

In response, the CPS agreed to push back the return of K-8 teachers and staff to Jan. 27, giving the two sides more time to negotiate. Schools chief Janice Jackson wrote in an email to families that the district still wants K-8 students to return as scheduled.

“The scheduled return date for students in grades K-8 remains Monday, Feb. 1, and it is our goal to reach an agreement with CTU as soon as possible to ensure tens of thousands of additional students have the opportunity safely return to our classrooms,” the letter reads.

The district officials last week warned against the teachers’ vote, saying that the collective refusal of returning to in-person work could be viewed as a strike.

“The decision by the union to remain out of schools and deny families access to in-person school is a decision to strike,” Matt Lyons, the district’s chief talent officer, wrote in a letter to teachers. “This vote would cancel in-person learning for the tens of thousands of students who asked to return—and the thousands of pre-K and cluster students who are already learning safely in classrooms. Our collective bargaining agreement includes a no-strike clause, and the Illinois Educational Labor Relations Board has ruled a strike of this nature would be illegal.”