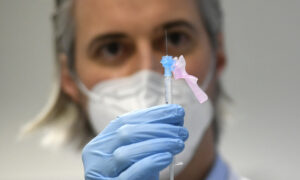 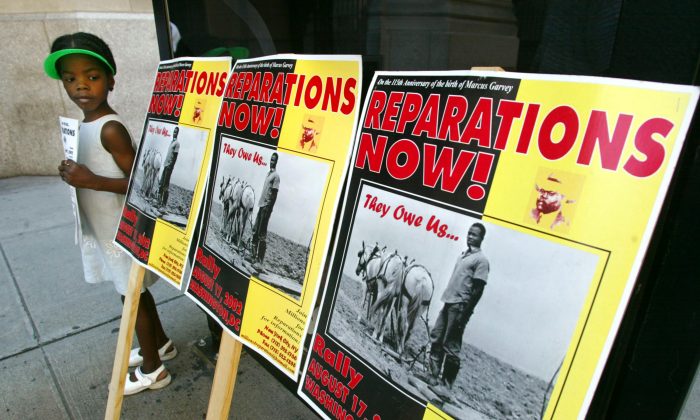 Officials in a Chicago suburb on Monday approved a first-of-its-kind reparations program that will provide housing grants to black residents as compensation for past municipal segregationist policies, with the money coming from donations and tax revenues from sales of recreational marijuana.

City Council members in Evanston, Illinois, voted 8–1 to adopt the “Local Reparations Restorative Housing Program and Program Budget” resolution, setting in motion an initiative first approved in 2019 and that some argue could serve as a reparations template elsewhere in America.

Under the measure, eligible black households in Evanston would receive $25,000 for home repairs or down payments on property. The money for the housing grants—initially totaling $400,000 and later expanding to $10 million within 10 years—is to come from donations and a 3 percent sales tax on marijuana.

Qualifying residents must either have lived in or been a direct descendant of a black person who lived in Evanston between 1919 to 1969 and who suffered discrimination in housing because of city ordinances, policies or practices, according to program guidelines (pdf). Applicants also qualify if they experienced housing discrimination due to the city’s policies or practices after 1969.

Local historian Dino Robinson co-authored a report (pdf) that informed the process of considering the Evanston reparations program, which to be adopted had to connect restorative relief to harm caused by city policies.

Robinson’s report argues for the presence of historically racist housing policies and practices, both explicit and implicit, including zoning laws and “redlining,” a practice in which banks generally only made housing loans to blacks in neighborhoods intended—or redlined—for black occupancy.

“Redlining was a federal project to determine the market values of areas and neighborhoods,” Robinson told ABC News in an interview. “[There were] four categories, ‘A’ being the highly desired area, ‘D’ the lower, lowest-value properties. The ‘D’ areas were usually relegated to the Black community. ‘D’ was always in red.”

Robinson argued that black residents in Evanston were moved into a triangle-shaped area that became the 5th Ward, deliberately segregating them from sought-after property elsewhere in the city.

“Indeed, this section was precisely located in the area that would be home to the vast majority of Black residents by 1940, the fifth ward. This was not by accident; it was by design,” Robinson wrote in the report.

Alderman Rue Simmons, who spearheaded the reparations initiative, said that past policies continue to have an impact on Evanston’s black communities.

“The historic redlining impacts our community today,” Rue Simmons told ABC. “That map still is the map of our concentrated Black community, our disinvestment, our inferior infrastructure.”

The plan has received some pushback.

Alderman Cicely Fleming, the lone vote against the plan, said she supports reparations, but what the City Council was debating is a housing plan that is masquerading as reparations.

A group opposed to the initiative, called Evanston Rejects Racist Reparations, has argued there are “numerous flaws” in the proposal and denounced the measure in a post on its Facebook page.

“And so it begins—the renaming of social equity homeownership programs to reparations. It’s shameful and destructive to the legitimate reparations movement,” the group argued.

“After housing programs are renamed look for food stamps, free school lunch, public housing, and every social equity effort that comes to mind to become reparations. It’s irresponsible and shameful,” the group added.

In Congress, a bill that would establish a national reparations commission to study the issue has drawn around 170 co-sponsors in the House, all Democrats.

President Joe Biden has not endorsed the legislation but said that he supports a study. Later, a senior Biden adviser said that the White House will act on its own to develop proposals for reparations, without waiting for the study to be concluded.

The idea of reparations has been flagged as problematic for a variety of reasons, including how recipients of reparations would be selected, how much would be paid out, and who would foot the bill.

At a Congressional hearing in February, lawmakers discussed H.R. 40, the bill that would “establish a commission to study and develop Reparation proposals for African-Americans as a result” of slavery and “the lingering negative effects of the institution of slavery.”

Rep. Burgess Owens (R-Utah), whose great-great-grandfather arrived in the United States on a slave ship, said at the hearing that he is opposed to reparations, denouncing related measures as socialistic redistribution of wealth.

“We are discussing this morning the theory of reparation; it is nothing new. It’s been tried over the last 100 years, resulting in the misery and death of 100 million men, women, and children,” he said, referring to the death toll historians widely attribute to communist regimes. “It’s called redistribution of wealth, or socialism.”

Owens also said that, “it is impractical and a nonstarter for the United States government to pay reparations,” and that “it is also unfair and heartless to give Black Americans the hope that this is the reality.”

Reparations lack broader support among Americans, with a Reuters/Ipsos poll taken in June 2020 finding that only one in five respondents agreed that the United States government should pay damages to descendants of slaves.

“The reality is that Black American history is not one of a hapless, hopeless race oppressed by a more powerful white race. It is instead a history of millions of middle- and wealthy-class Black Americans throughout the early 20th century achieving their American dream,” Owens said.

Rep. Sheila Jackson Lee (D-Texas), the bill’s author, acknowledged Owens personal success, saying that he “eloquently” spoke of successful overcomers in the black community, but said that his argument misses the point of the legislation, which she says is to address disparities.

“We’re hidden in the corners of this nation, of those of African-American heritage, the descendants of enslaved Africans who have felt the sting of disparities. They continue to feel that sting,” Lee said.