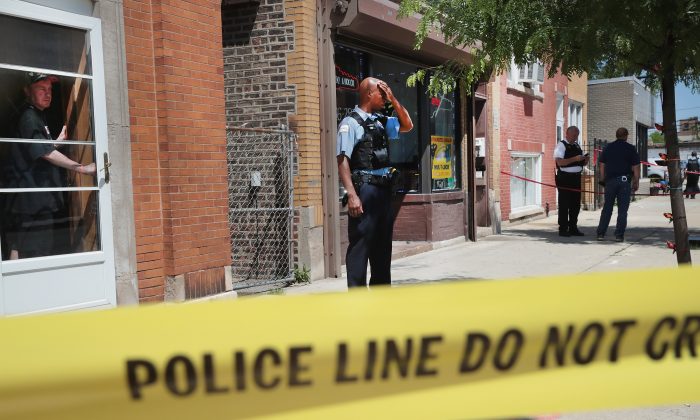 At least nine people were killed and 19 were wounded in a spate of shootings over the weekend in Chicago, it has been reported.

The teenage grandson of U.S. Rep. Danny Davis was among those killed in the shootings that took place across the city between Friday night and Sunday night, police said, as ABC7 reported. Davis’ grandson, Javon Wilson, 15, was shot inside his Englewood neighborhood home after two individuals broke inside and argued with the boy before shooting him.

Tariq Harris, 16, and Diajae Banks, 17, were charged in the shooting of Wilson, police told ABC7. Wilson was shot and killed on Friday night.

The most recent fatal shooting took place at 8:40 p.m. on Sunday night when a 20-year-old was shot as he was walking in the Heart of Chicago neighborhood on the South Side, police said.

The latest Chicago shooting occurred just after 5 p.m. on Sunday night in the East Side neighborhood on the Far South Side, NBC Chicago reported. The victim was identified as Paul Cruz, 31.

On Sunday morning at 4:30 a.m., a 28-year-old man was shot and killed in the West Rogers Park neighborhood on the Northwest Side. The unnamed victim was pronounced dead at 7:43 a.m., police said.

Another man was shot and killed at about 3:30 a.m. in the Chatham neighborhood on Chicago’s South Side, NBC reported.

About a half an hour earlier, a 24-year-old man was shot and killed in the Wicker Park area on the city’s North Side. The victim was gunned down by someone in a red Nissan Pathfinder as he was walking, police said.

On Sunday at 12:50 a.m., 22-year-old Odell Jones was shot dead in the West Englewood neighborhood on Chicago’s South Side. He was pronounced dead at the scene at 1:17 a.m., NBC said.

An 18-year-old man was shot and killed on Saturday morning in the West Side Austin neighborhood shooting; a 13-year-old boy was shot and wounded in the same incident. The 18-year-old was shot in the head and was pronounced dead at 11:31 a.m., NBC reported.