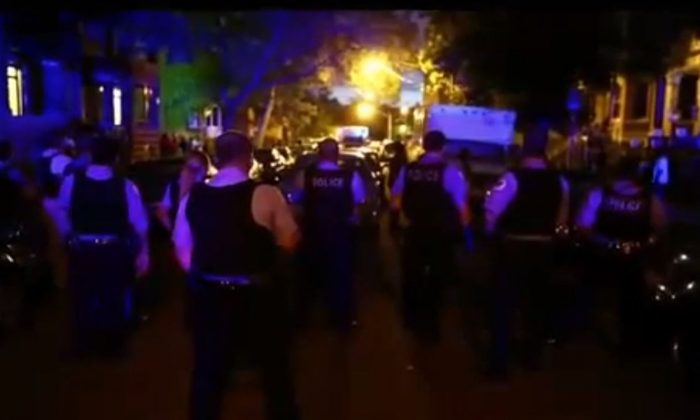 A screenshot of a Chicago Tribune-made YouTube video shows a strong police presence on S. Springfield Ave. after a shooting over the weekend.
US

Chicago shootings killed seven people and left more than three dozen people wounded over the weekend, making it the most violent weekend in the city this year.

Most of the violence took place between Saturday afternoon and Sunday morning, reported DNAChicago.com when six were killed and 15 were wounded. However, there were other shootings overnight from Sunday into Monday and Friday night and Saturday, leaving one person dead.

The Chicago Tribune pointed out that it was the most violent weekend this year. Overall, 41 people were shot and injured and the youngest person who was killed at 15 years old.

Chicago Police Department spokesman Adam Collins told the website that despite the violence, 2013 is looking to be marginally less violent than 2012.

There were “eight fewer shooting incidents this weekend compared to the same weekend in 2012,” he said.

“While we’ve had fewer murders to date this year than any year since the mid-1960s, there’s more work to be done, and we won’t rest until everyone in Chicago enjoys the same sense of safety,” Collins said.