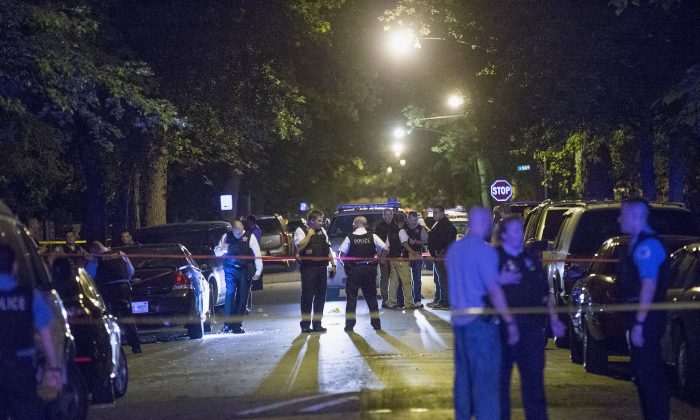 A 15-year-old boy was shot and killed and nine others were shot across Chicago on Aug. 6. (Scott Olson/Getty Images)
Crime and Incidents

At least two people were shot and 12 were injured in shootings across Chicago over the weekend—a sharp decline over numbers seen in November, likely due to a snowstorm and brutally cold temperatures that inundated the city.

NBC Chicago reported that the most recent deadly shooting occurred on Sunday afternoon in the Far South Side neighborhood. The victim, identified as 45-year-old Anthony Barr, was in a car when he was approached by two males who opened fire before running off, police said. He was shot in the head and pronounced dead at the scene.

The first fatal shooting took place on Friday night in the Chatham area of Chicago’s South Side, when a 34-year-old man was gunned down by someone he knew inside a home after a fight. He was taken to nearby Stroger Hospital and was pronounced dead.

Last weekend, two people were killed and 18 were injured in shootings across Chicago.

Police said that in November, there were 77 murders and 389 shootings—making the month the third-deadliest in 2016.

On Monday morning, temperatures got as low as 18 degrees Fahrenheit after a weekend snowstorm that dumped 3 to 8 inches throughout Chicago.

DNAInfo says that about 712 people have been killed in Chicago this year. Last year, 495 people were murdered in the city, and in 2014, 427 were killed.