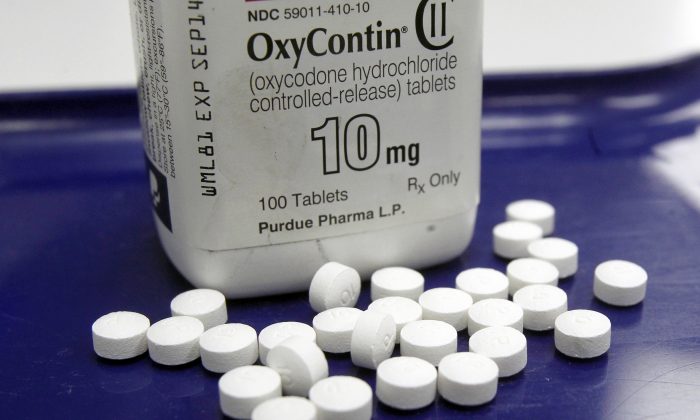 FILE - This Feb. 19, 2013, file photo, shows OxyContin pills arranged for a photo at a pharmacy in Montpelier, Vt. Overdoses don't happen just to heroin addicts _ patients who legally use strong painkillers called opioids are at risk in the nation’s epidemic, too. A new study says when patients were prescribed an overdose antidote along with those medications, they made fewer painkiller-related visits to the emergency room. The study released on June 27, 2016, went a step further _ to see if the take-home antidote idea also could work for patients with chronic pain who may not realize they could accidentally get into trouble with prescription painkillers such as Oxycontin, Vicodin and others. (AP Photo/Toby Talbot, File)
US

CHICAGO—The city of Chicago says it has reached an agreement with Pfizer committing the drugmaker to disclosing the risks of addiction in its marketing of prescription opioid painkillers.

Chicago is suing five pharmaceutical companies, alleging they have misrepresented the benefits of opioids while concealing serious health risks associated with the drugs.

Pfizer Inc. is not named in the lawsuit. But Mayor Rahm Emanuel’s office said in its announcement Wednesday that Pfizer has cooperated with the city’s investigation and the legal action.

The agreement with Pfizer also bars it from supporting organization or individual who make inaccurate claims about the risks and benefits of opioids.

A Pfizer spokeswoman did not immediately respond to a request for comment.