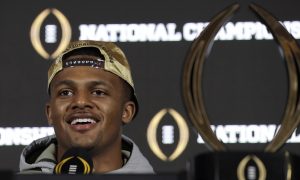 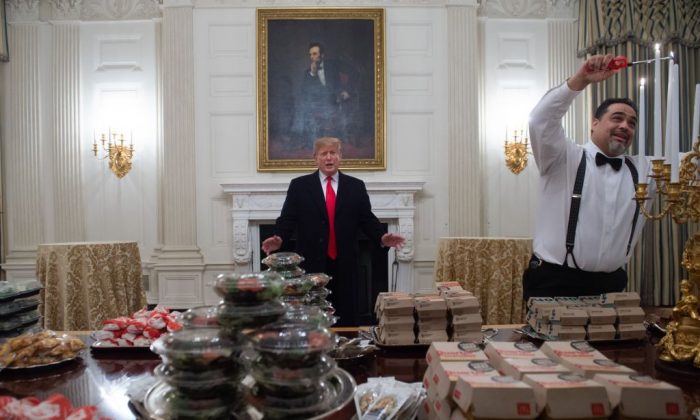 President Donald Trump speaks alongside fast food he purchased for a ceremony honoring the 2018 College Football Playoff National Champion Clemson Tigers in the State Dining Room of the White House in Washington, on Jan. 14, 2019. (Saul Loeb/AFP/Getty Images)
US News

A Chicago restauranteur offered the Clemson Tigers a celebration dinner after President Donald Trump treated the team to a fast food buffet at the White House.

However, a number of people panned Nick Kokonas, co-owner of Alinea, after he extended his offer, saying he’s an opportunist looking for free publicity.

According to Eater, Alinea was described as one of the “most expensive restaurants in America” and has been dubbed Chicago’s highest-rated fine dining restaurant with three Michelin stars.

“I could care less about college football. But I’m personally inviting the Clemson Tigers team and coaches to Chicago to experience what an actual celebration dinner should be,” Kokonas wrote on Twitter.

He added: “I’m not joking. Someone let them know what The Alinea Group does. It’ll be worth it.”

“I like a burger as much as anyone else. At the end of the day, though, I’m betting they’ve had that, as football players, a thousand times. I bet they’ve had nothing quite like what we do,” Kokonas told The Chicago Tribune.

He said the Clemson football team, which won a championship over Alabama, would be served “maybe four or five suckling pigs roasted properly, and the Roister fried chicken.”

HA! Owner of @Alinea in Chicago (used to be a big deal fancy restaurant) thinks football players would have rather eaten there than Big Macs in the White House. Clearly they have never met football players. Those guys don't want micro portion gastronomy https://t.co/HPPVUwshwH

“HA! Owner of @Alinea in Chicago thinks football players would have rather eaten there than Big Macs in the White House. Clearly they have never met football players. Those guys don’t want micro portion gastronomy,” one critic tweeted.

Added another: “How opportunistic based off the pictures on @Alinea twitter page the Clemson players ate better at the White House.”

Gross and opportunistic restaurant using those boys for free PR.

“Gross and opportunistic restaurant using those boys for free PR,” another person said.

“Those portions from Alinea,” another wrote, adding a few “thumbs down” emoji.

One person said the Clemson team wouldn’t be filled up by Alinea’s portions. “[I’m] sure they would go to McDonald’s after to get real food,” they said.

“It was awesome. We had McDonald’s and everything, it was good,” Trevor Lawrence, Clemson’s star quarterback, told TMZ on his way out to the bus after the dinner.

Lawrence added on Twitter that “the trip to the White House was awesome!”

Matt Bockhorst, another player, was pictured eyeing the platter of Big Macs before grabbing two.

I mean you’re not just gonna NOT eat the Big Macs stacked in a pile right? https://t.co/nsWC0ptCvi

“I mean you’re not just gonna NOT eat the Big Macs stacked in a pile right?” Bockhorst said on Twitter in response to the photo.

On Twitter, the day after, Trump said he paid for the meal with his own money amid the partial government shutdown.

“Great being with the National Champion Clemson Tigers last night at the White House. Because of the Shutdown I served them massive amounts of Fast Food (I paid), over 1000 hamburgers etc. Within one hour, it was all gone. Great guys and big eaters!” the president said on Twitter.

“So, I had a choice: Do we have no food for you? Because we have a shutdown. Or do we give you some little, quick salads that the First Lady will make along with the Second Lady. They’ll make some salads. And I said you guys aren’t into salads,” he said.

“Or do I go out and send out for about 1,000 hamburgers? Big Macs. So we actually did. We bought 1,000—Burger King, all American companies. Burger King, Wendy’s, and McDonald’s. We have Big Macs. We have quarter-pounders with cheese. We have everything that I like, that you like.”