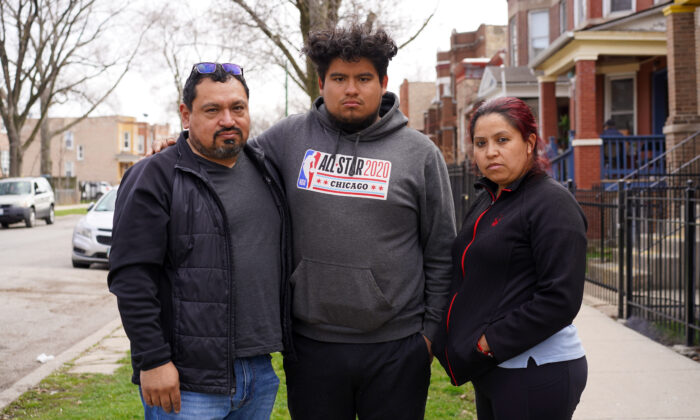 Hugo Limon (left), Hugo Limon Jr., and Patricia Carrillo stand on their block in the Humboldt Park neighborhood on the West Side of Chicago on April 11, 2022. (Cara Ding/The Epoch Times)
US Features

Over the past four years, Patricia Carrillo and her husband Hugo Limon have done everything they could to steer drug sellers away from their block.

They took pictures of illicit drug dealings and shared them with police, they mustered the courage to meet with drug crew bosses, and they went to court to plead with judges to lock them up.

Their initiative annoyed some sellers, who threatened to harm them should they continue fighting, yet they didn’t back off.

Over time, neighbors began to pitch in, and things started to turn. Slowly, drug sellers in the area dwindled in number and retreated to street corners.

“So many people told me that if I didn’t like it here, I should just move out. I was like, ‘No, this is my neighborhood, this is my home. Why should I move out, not those guys?’” Carrillo said.

Since Carrillo married Limon about 20 years ago, they’ve lived on the 1100 block of Monticello Avenue, in the West Humboldt Park neighborhood, on the West Side of Chicago.

The block used to be heavily African American. Now eight out of 10 residents are Hispanic.

Illicit drug dealings have always been an issue. At the worst point, sellers operated a drive-through right in front of their apartment, and Limon had to push his way through just to reach their gate.

There used to be a McDonald’s, a CVS store, and a Dunkin Donut store just around the corner, but one by one, they closed or relocated.

“They were in the McDonald’s parking lot so customers could get meals and drugs at the same time. It was really, really super bad,” Limon said.

But what bothered them the most was that sellers consistently peddled marijuana to their two sons.

“It is obviously up to you if you want to be committed and addicted to that. If you choose to do that, then that is your fault, and that is you giving up, essentially,” Limon Jr. said.

He said his parents helped him understand right from wrong, but some of his friends weren’t so lucky. Their parents were mostly absent, or worse, abusive.

Six of his friends, all high-schoolers, have joined gangs and sold drugs on the streets.

That’s often a dead-end route, Limon Jr. said. He saw one of his friends get shot multiple times after getting into an altercation with rival gang members.

For a long time, Carrillo and Limon hoped the police would solve the problem. After all, by law, what these sellers were doing was illegal.

They called the police at the 11th district station, attended community meetings to speak with beat officers, and sent pictures of illicit drug dealings to a sergeant at the Chicago Police Department’s (CPD) Narcotics Division.

But they said the answer they got was almost always, “Sorry, but there’s nothing we can do.”

For these types of crimes, police must catch drug sellers in action, which is hard to do, they were told. Or police could search a person based on reasonable suspicion that he has committed a crime—but many officers were wary of doing this for fear of potential civilian complaints or civil rights lawsuits, a police source told The Epoch Times.

A lot of times, police could only catch them with simple drug possession, not with the intent to distribute.

After all the hustles of arrest, paperwork, and jail booking, the cases would be quickly dismissed by prosecutors or later tossed out by judges, police told them.

“Why bother doing all this if they will be out in hours?” police told them.

But Limon thinks there are still things police can do better.

He said the local police station once stationed a squad car near the drug spots hoping to deter illicit drug activities. But he often saw police officers dozing off or looking at their phone in the car.

“Nobody put a gun to your head for you to choose this job. So if you are going to do this career, at least do your best,” Limon said.

The CPD told The Epoch Times in a statement that they don’t discuss specifics of policing, including deployment and patrol strategies, as a matter of safety and caution.

Out of options, Limon and several neighbors arranged a meeting with one of the drug crew bosses.

The boss told them, “I don’t really care. I want to work my [expletive] off, and I don’t care.”

The West Side of Chicago has long been a drug epicenter. Addicts from across the metro area drive via highway I-290 to its open drug markets to get fixes.

The boss asked the neighbors, “What else do you want me to do?”

The boss also offered to pay $300 to rent a bouncy house for a block party, but Limon refused.

“If we accepted his money, he would think his sellers could stay here. So I said, ‘No, no, we don’t want your money, we want you to get out of here, and we are going to continue fighting,’” he said.

But he was undeterred. He said he talked to them just like a human being talks to another human being.

At the time, he was working two jobs, sometimes sleeping for only three hours per day. To help her husband, Carrillo gradually took over some work, including emailing pictures to police officers.

Carrillo, an immigrant from Mexico, spoke almost no English at the time. But the desire to better her block helped her overcome the language barrier and shyness, she said.

In 2019, Carrillo was knocking on neighbors’ doors to get everyone on board.

Some asked her to not bother them. Others told her, “This is West Side. What do you expect?”

Carrillo carried on. She led committed neighbors to clean up a vacant lot where sellers often hung around. They turned it into a community garden with a mini basketball court, Mexican-style ground oven, and sitting areas.

She also led regular clean-up efforts, so the block was nice and neat; she held regular safety walks with police officers, so they knew what was happening on the block; and she talked to police captains, CPD Superintendent David Brown, and Chicago Mayor Lori Lightfoot.

“The sellers were like, ‘Okay, now I have the whole block against me,’” Limon said.

Slowly they dwindled in number and retreated to street corners, according to Carrillo.

It isn’t clear if other factors were also responsible for the ebb and flow of illicit drug dealings on her block.

While Carrillo was making all these changes, another set of changes was also taking place in the criminal justice system.

In January 2020, Illinois legalized marijuana. Although it’s still illegal to sell marijuana on the street without a license, the law further disincentivizes police to arrest marijuana peddlers, according to Limon.

As of press time, Foxx hasn’t officially suspended that policy. In other jurisdictions, such as Baltimore, similar pandemic nonprosecution policies were later made permanent.

These changes reflect a wider trend in the criminal justice system to decriminalize drug possession and divert people to social service programs. Common theories driving the trend are that drug arrests fail to address the root problems and disproportionately hurt black people.

But Limon asked, what about the cost to me and my family?

Carrillo requested a meeting with Foxx, but hadn’t heard back from her office as of press time.

In recent months, Limon and Carrillo have noticed that more sellers have moved back onto the corners of their block. The sellers also travel through their block more often. One night in her apartment, Carrillo heard multiple rounds of shootings.

Limon and Carrillo said they wouldn’t stop fighting. Recently, they became court advocates, going to court and talking to judges about the harm these sellers have caused their neighborhoods.

First they would get a list of cases from the state Attorney’s Office. After that, they have a way to identify defendants who have sold drugs on their block. Then they attend related court hearings to plead with judges to lock them up or put them away for a longer period of time.

“I said, ‘Look, judge, he got a gun case, he got a robbery, his rap sheet is so long, perhaps this time you should let him do some time,’” Limon said.

But ultimately, it’s up to judges to decide.

They also plan to ask judges to issue restraining orders against some sellers, essentially banning them from selling drugs on their block.

Some state attorneys warned Limon and Carrillo about coming to court. The defendants or their associates might retaliate against you or your family, they told the couple.

“I am not afraid,” Limon said. “We are in the block fighting, and now we are in the court fighting.”