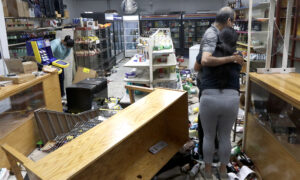 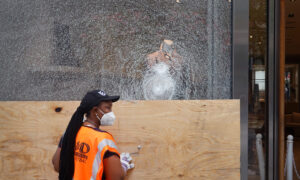 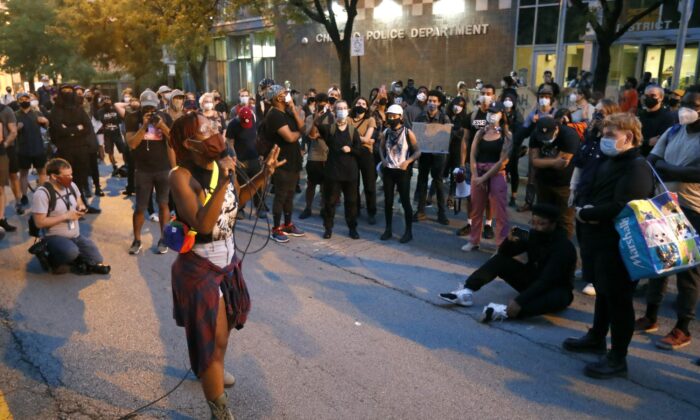 Residents in the neighborhood of Englewood in Chicago faced off with demonstrators from Black Lives Matter and other groups on Tuesday, questioning their tactics in the aftermath of looting and violence.

Protesters with Black Lives Matter Chicago and other organizations gathered outside the Englewood Police Station, drawing criticism from some locals.

“If you ain’t from Englewood, get the [expletive] out of here,” Darryl Smith, who has lived in the area for 51 years, shouted, Fox 32 reported.

Smith said the anger stemmed from what transpired over the weekend. After a 20-year-old man refused to stop for the police and fired gunshots at officers, he was shot before being taken to the hospital, police officials said.

Possibly in response to what officials called misinformation about the police-involved shooting, hundreds of people descended on the downtown area on Sunday night and committed crimes like looting and property destruction.

“A lot of people saying the looting started because of Englewood. We are tired of Englewood getting a black eye, those people were opportunist,” Smith said.

He took aim at what he sees as misguided priorities.

“Y’all don’t come out when the kids get shot. Y’all come out when it has something to do with the [expletive] police,” Smith told the demonstrators, according to Block Club Chicago. “We out here every day watching our kids get their brains blown out, with no budget, no resources. Y’all [expletives] getting all the resources, and you want to come over here and disrupt our neighborhood.”

Community members told ABC 7 that they’ve been working with the police and regard the demonstrations as an intrusion on those efforts.

“If you are going to do something, do it right. And you put other people’s lives at risk when you coming into someone else’s neighborhood you don’t know the dynamic,” Duane Kidd, a local, told the broadcaster.

“Coming into our community for just one day and then run out,” Kidd added to the Chicago Tribune. “Everyday. If they got something to say about the police, we got to deal with it tomorrow. The community. Not them. They’ll be somewhere sipping sangria.”

Eventually, most of the demonstrators left the area, news outlets reported.

Police officials said Wednesday that they appreciated the support from nearby residents.

“The good citizens, the good community members of Englewood, stepped up and said ‘we are not going to allow more chaos in our neighborhoods,'” Commander Larry Snelling of the 7th District told ABC 7.

In a press release issued on Sunday, the group said that “members of the Englewood community are traumatized and want answers” regarding the shooting of the 20-year-old, Latrell Allen.

“The people of Englewood showed up immediately because they wanted to protect their community members from harm. CPD, meanwhile, was only interested in protecting itself; their response to these bystanders was sending in hundreds of officers with assault rifles, tear gas, and batons,” the group alleged.

Black Lives Matter Chicago at a rally on Monday denounced the arrests of more than 100 looting suspects and said they want to abolish the police.

Good Kids Mad City, another local group, said on Twitter that they didn’t participate in the protest on Tuesday “because aggressive agitators were being disruptive & tried to provoke us into a violent confrontation.”

The Chicago Police Department, meanwhile, released a video showing footage of people they said engaged in the looting and civil unrest.

Anyone with information was asked to contact Chicago Police Department detectives directly at (312) 744-8263 or submit a tip online or with your mobile device at www.CPDTIP.com.