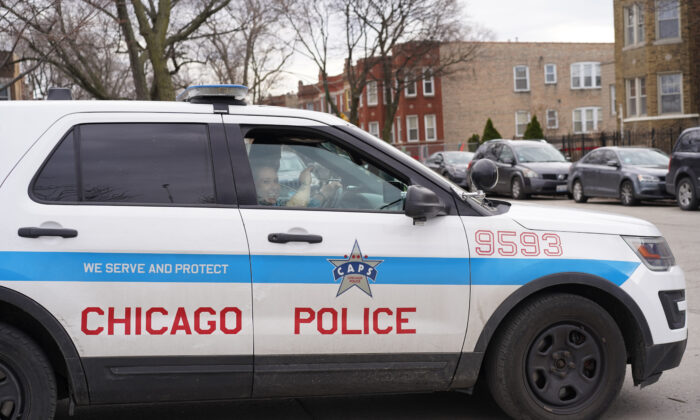 Chicago police officers patrol near a known open air drug market in the Humboldt Park neighborhood on the West Side of Chicago on April 11, 2022. (Cara Ding/The Epoch Times)
Illinois

Chicago police officers can no longer give chase to people who run away under certain conditions per a new foot pursuit policy that changes how law enforcement members can do their jobs.

Foot pursuits pose “inherent risks” for officers, suspects, and the public, and the new Chicago Police Department policy tells officers they should only give chase if there is probable cause for an arrest.

Officers must also weigh the risk to the public and to officers if they let the offender run away or give chase, according to a policy draft.

The policy also says that law enforcement should consider if the offender can be pursued by alternate means, such as the use of “tactical and technological apprehension efforts.”

As a safety measure, Brown said the policy would limit the “physicality” between officers and offenders, who are potentially armed.

Today, we released the new finalized foot pursuit policy which is rooted in community safety and officer safety. The policy will be implemented after officers receive training on the new guidelines.

Foot pursuits may occur if an officer believes the need to detain the potentially armed offender is worth the risk to the public and to officers.

The officers must believe the person “has committed, is committing, or is about to commit” a felony, a class A misdemeanor, a traffic offense that endangers the physical safety of others, or for an arrestable offense.

Law enforcement members will be barred from chasing those who commit or are about to commit more minor crimes under the new rule.

The new policy comes with new foot pursuit forms for officers, which are being opened up for the public to review and give feedback.

Some of the class A misdemeanors where officers will be permitted to give chase on foot or bike include aggravated assault, battery, domestic battery, unlawful use of weapon, criminal trespass of a residence, theft, and retail theft.

But foot pursuits will be prohibited for less than class A misdemeanors such as business license offenses, parking violations, ordinance violations, or class B and C misdemeanors including simple assault and criminal trespass to land.

Driving under the influence, reckless driving, and street racing are traffic offenses that permit a law enforcement officer to give chase on foot or bike.

But the minor traffic offenses where a foot pursuit will be prohibited include licensing violations, insurance violations, and “other petty violations enforceable by citation only.”

Additionally, CPD will be reviewing all foot pursuits, according to the policy draft. The new policy will only be enacted once all officers have been trained, NBC reported.