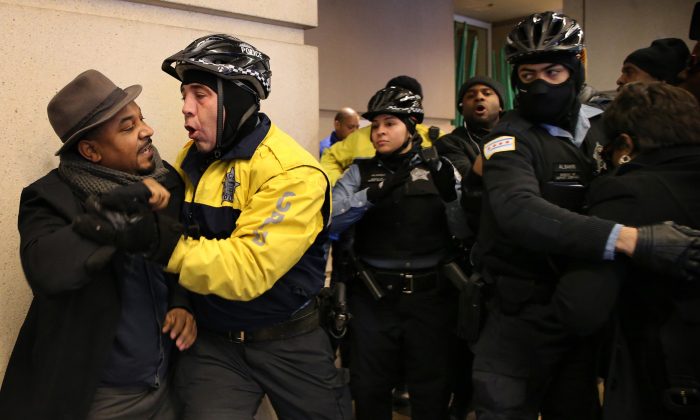 Willie Preston, left, scuffles with a police officer after he and other protesters tried to keep two women, partly seen at right, from attending the annual Interfaith Breakfast at the Hyatt Regency McCormick Place hotel in Chicago, Friday, Jan. 15, 2016. (Antonio Perez/Chicago Tribune via AP)
US

CHICAGO—Unions representing Chicago police officers are fighting for the destruction of tens of thousands of documents from disciplinary files dating back several decades, just as activists and community leaders are demanding more access and transparency from a department under intense scrutiny after several controversial police shootings.

The two unions‘ contracts with the city stipulate that the records, including complaints alleging misconduct, be destroyed after five years in most cases if no litigation is ongoing. The city says it has had to keep the files because of federal court orders issued in litigation going back to the 1990s. But the unions say they only recently discovered they still existed when the city informed them it would release all documents as part of a massive public records request by several newspapers.

A judge who has kept the records in limbo for more than a year said at a hearing Friday that he would keep a union-requested injunction in place pending the outcome of more negotiations between the city and the unions. Arbitrators have sided with the unions but in a decision this week gave the sides until March 15 to work out a system for determining which of the documents are subject to destruction.

Cook County Circuit Judge Peter Flynn said Friday that he will eventually have to consider whether the state’s Freedom of Information Act requires the city to release material it shouldn’t have had in the first place.

Those pushing for changes to the police force say the public has a right to see it all, especially in light of recent cases like the 2014 shooting death of Laquan McDonald. A white officer shot the black teenager 16 times while responding to a call about someone breaking in to cars. Video of the shooting was released on a judge’s order in November and showed McDonald carrying a knife but walking away from officers. It contradicted accounts of officers who said McDonald lunged at officers.

Mayor Rahm Emanuel has pledged greater openness and “complete and total reform” of the system and culture of policing, but protests and calls for his resignation have persisted. On Friday, protesters disrupted Emanuel’s annual breakfast honoring Martin Luther King Jr.

“We have serious, systemic problems in the city of Chicago,” said Craig Futterman, a University of Chicago law professor and reform advocate who is pressing for the police files to be released. “You don’t destroy evidence. … They have to be produced; it’s that simple.”

The officer who shot McDonald, Jason Van Dyke, was charged with first-degree murder only hours before the video was released and more than a year after the shooting. His attorney says he acted properly and fired out of fear for his life.

Van Dyke was the subject of 18 civilian complaints over 14 years, including allegations that he used racial epithets and excessive force, police and court records show.

The unions argue that police officers are susceptible to false complaints and reports that go unsubstantiated should not have an indefinite shelf life. The contracts state that even files that are linked to litigation have to be destroyed once those cases are finished, in most instances.

It’s one of the protections in the union contract that critics want scaled back in light of recent cases.

“My position is simple: You made this agreement; stick to it,” said union attorney Thomas Pleines. “And if things have now changed to the point where you can no longer live up to the agreement, then negotiate a new agreement.”

Some of the documents still on file date back to the 1960s, Pleines said, adding that the vast majority relate to mundane matters rather than sensational cases of abuse or misconduct.

Pleines said the city has notified him it will seek a court ruling to vacate the arbitration decision on the grounds that it violates state public policy in the Illinois Freedom of Information Act.

Bill McCaffrey of the city’s Law Department said in a statement the police unions have been notified many times over 20 years that the records were being preserved.

“Our longstanding position is that these records have an administrative and legal purpose that warrants preservation, and we will continue our legal efforts to maintain and preserve these records,” he said.