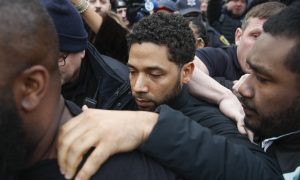 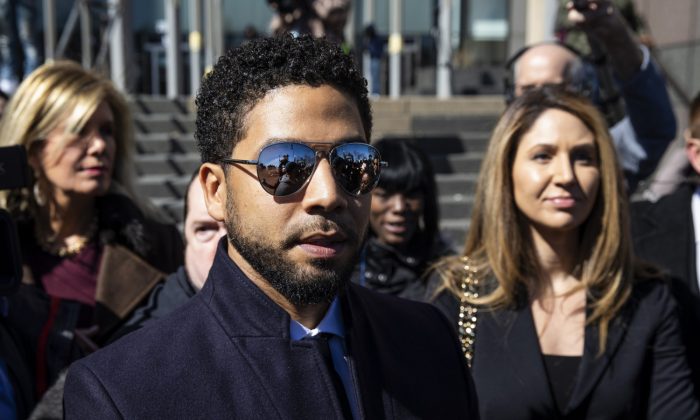 Actor Jussie Smollett leaves the Leighton Criminal Courthouse in Chicago on 26, 2019, after prosecutors dropped all charges against him. (Ashlee Rezin/Sun-Times/Chicago Sun-Times via AP)
Entertainment News

Chicago officials said they were planning to send actor Jussie Smollett a bill for the cost of the investigation into claims that he was a victim of a “hate crime.”

Police Department spokesman Anthony Guglielmi told Page Six on March 28 that “the City of Chicago will be sending Mr. Smollett a bill.”

“From a 30,000-foot view, the bill will include the hours, the overtime, the financial costs and the resources that were used,” Guglielmi said.

“It was an extensive investigation that required a lot of review of cameras. There was technical assistance provided by external agencies, but it’ll likely only include Chicago expenses and not expenses incurred by the FBI and other technical experts we brought in for analysis,” he added.

The approximate cost or the timeline for when the bill will be due was not provided.

Earlier today, Mayor Rahm Emanuel told WGN Radio that he thinks Smollett should foot the bill for the police’s investigation.

“The police right now is assembling the cost of what was put into this and the Corporation Counsel will take action based on those costs directly to Jussie Smollett,” Emanuel said.

“The Corporation Counsel, once they … feel good about the numbers will then send a letter to Jussie Smollett and his attorneys trying to recoup those costs for the city,” he added.

“It’s a small way of acknowledging 1. guilt, and 2. that we spent these resources and that the taxpayers deserve a minimum … ethical cost.”

Prosecutors announced on March 26 that 16 felony counts filed against Smollett for filing a false police report were dropped because the actor completed 16 hours of community service and forfeited his $10,000 bond to the city.

“The financial cost, this $10,000, doesn’t even come close to what the city spent in resources to actually look over the cameras, go through data, gather all the information that actually brought the indictment by the grand jury,” Emanuel told CBS News on March 26.

Joe Magats, the assistant state attorney who made the decision, told the New York Times that they did not exonerate Smollett. Instead, he said the decision was made in exchange for the actor completing community service and forfeiting his bond.

“Here’s the thing—we work to prioritize violent crime and the drivers of violent crime. Public safety is our number one priority. I don’t see Jussie Smollett as a threat to public safety,” Magats said.

Chicago police officials and Emanuel were furious after the charges were dropped, with the mayor calling it a “whitewash of justice.”

President Donald Trump commented on the situation early March 28, alerting people that he was getting federal authorities involved.

“FBI & DOJ to review the outrageous Jussie Smollett case in Chicago. It is an embarrassment to our Nation!” he said in a post on Twitter.

The FBI is already conducting a probe into a threatening letter Smollett received on the set of “Empire” in Chicago. According to the police, the incident was orchestrated by Smollett himself.