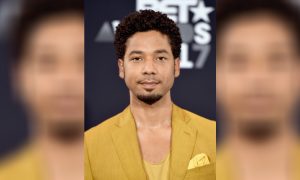 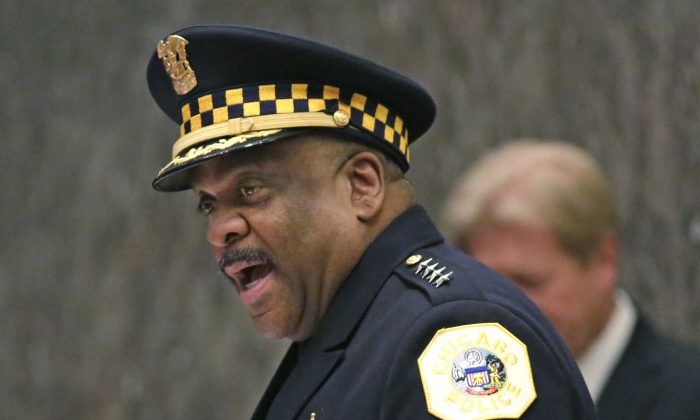 Eddie Johnson, left, speaks after being sworn in as the new Chicago police superintendent in Chicago, on April 13, 2016. (M. Spencer Green, AP Photo/File)
US News

Chicago Police Superintendent Eddie Johnson is reportedly upset that the 16 felony counts against actor Jussie Smollett, who investigators said faked a hate crime against himself, were dropped on March 26.

“He had no heads up this was going to happen,” De Mar said, conveying information from the unnamed sources.

“I can tell you that Chicago Police are furious over State Attorney Kim Foxx’s decision to drop all charges against Jussie Smollett,” added Rafer Weigel of Fox Chicago. Officers told Rob Elgas of ABC Chicago that Johnson wasn’t told about the charges being dropped and learned about it while at a scheduled police graduation at Navy Pier.

The Chicago Police Department has not commented publicly on the charges being dropped. Johnson said during a press conference on Feb. 21 that investigators concluded Smollett had orchestrated a hate crime hoax, paying $3,500 to two Nigerian-American brothers to pose as supporters of President Donald Trump.

He had no heads up this was going to happen.@cbschicago

“This stunt was orchestrated by Smollett because he was dissatisfied with his salary,” he told reporters. “Smollett took advantage of the pain and anger of racism to promote his career. I’m left hanging my head and asking why.”

The Cook County State Attorney’s Office said in a statement after the charges were dropped: “After reviewing all of the facts and circumstances of the case, including Mr. Smollet’s volunteer service in the community and agreement to forfeit his bond to the City of Chicago, we believe this outcome is a just disposition and appropriate resolution.”

In a statement responding to the decision to drop the charges, the Smollett family said: “Our son and brother is an innocent man whose name and character has been unjustly smeared.”

MORE: A spokesperson for the Cook County State’s Attorney Office says there was no plea deal, but rather an “agreement,” and that no community service will be required of Smollett. https://t.co/B2ahaJSxt3

“Jussie is a son, a brother, a partner, a champion for human rights, and a genuine soul who would never be capable of what he was falsely accused of. He was the victim of an assault and then falsely blamed for his own attack. This morning truth has prevailed and he has been vindicated. All charges have been dismissed and his record expunged (cleared),” the family added.

“Today, all criminal charges against Jussie Smollett were dropped and his record has been wiped clean of the filing of this tragic complaint against him,” they said.

“Jussie was attacked by two people he was unable to identify on January 29th. He was a victim who was vilified and made to appear as a perpetrator as a result of false and inappropriate remarks made to the public causing an inappropriate rush to judgement.”

They added that Smollett “is relieved to have this situation behind him and is very much looking forward to getting back to focusing on his family, friends, and career.”