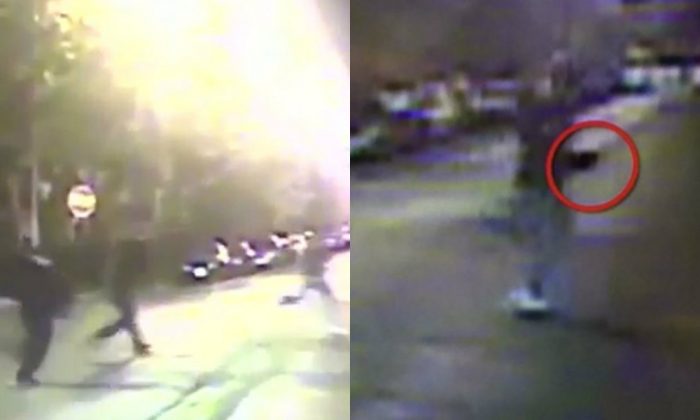 Officer in case not charged
By Jack Phillips

Chicago Police are bracing for even more protests after releasing video footage of an officer shooting and killing 25-year-old Ronald Johnson in October 2014.

The video, which was taken via a dash cam, appears to show him running away from officers. An officer fires several shots at him as he is fleeing on foot. Later, the footage pans over to officers standing over his body.

According to WGN-TV, police allege Johnson pointed a gun at Officer George Hernandez, who shot him. However, his mother said he was running away from police when he was shot and killed.

“No criminal charges should be filed because the crime cannot be proven beyond a reasonable doubt,” said Alvarez.

Johnson’s family filed a lawsuit seeking the release of the footage, reported the Chicago Tribune. Alvarez released the video as well as the 911 calls linked to the incident as well as a written analysis of the case.

A 9-mm handgun was recovered from Johnson, loaded with 12 rounds, the state’s attorney’s office added. The recovered weapon was linked to a prior shooting in Chicago.

The Chicago Police Department said that officers arrived on the scene after a call of “shots fired,” finding a man matching the description of the suspect. Then a suspect fled and during the chase, “the offender pointed his weapon in the direction of the pursuing officers. As a result of this action, an officer discharged his weapon striking the offender,” said the police department.

The Cook County State’s Attorney’s Office released the footage on Monday–the second of such in two weeks.

The footage comes after police released a video of the fatal shooting of 17-year-old Laquan McDonald, who was shot 16 times. Officer Jason Van Dyke was charged with first-degree murder in his killing.