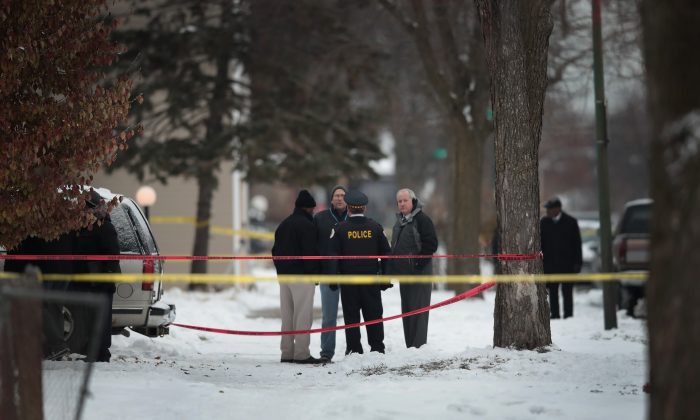 Police investigate the scene of a quadruple homicide on the city's southside on Dec. 17, 2016 in Chicago, Illinois.(Scott Olson/Getty Images)
Crime and Incidents

Chicago police say more than 55 people were shot, 11 fatally, over the holiday weekend and more than three dozen guns were seized.

The shooting tally includes violence at a family Christmas party on the city’s South Side at which two people were killed and several others wounded.

Police spokesman Anthony Guglielmi said in a statement that the majority of shootings and homicides from Friday afternoon through Monday morning were “targeted attacks by gangs against potential rivals who were at holiday gatherings.”

He says 45 guns have been seized since Friday afternoon, which is slightly more than a typical weekend.

Violence over the holiday weekend comes during a surge in city violence. More than 700 homicides have been reported this year. Last year, fewer than 500 homicides were reported.

Chicago authorities say two brothers are dead and several other people are injured after a shooting at a family Christmas party.

Police say people were gathered for a house party Sunday night on a porch when someone allegedly walked out of a nearby alley and opened fire.

No one is in custody and a motive has not been released.

The Cook County Medical Examiner’s Office identified the victims as 18-year-old James Gill, who was pronounced dead at the scene, and 21-year-old Roy Gill. He died later at a hospital. Several others were hospitalized for injuries.

The Chicago Tribune reports (http://trib.in/2hr6Uju) the men were brothers. Family members, ready to celebrate the holiday, were instead mourning the tragedy.

Kim Gill tells the newspaper her brothers were working and attending a city college.