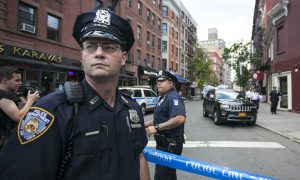 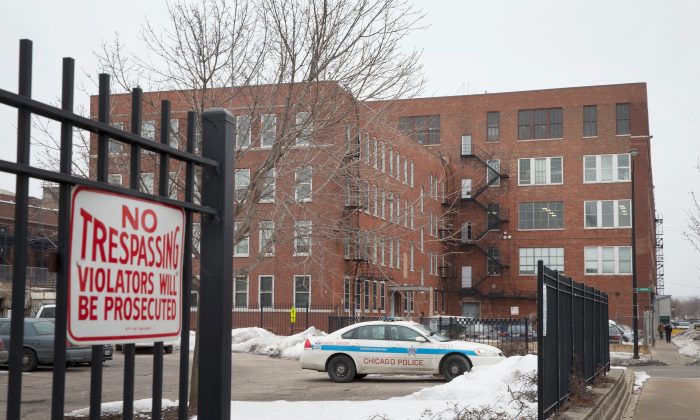 A Chicago police facility on the city's Westside on Feb. 25, 2015 in Chicago, Illinois. An investigative report by the Guardian newspaper recently claimed the facility was used by Chicago police as a "secret interrogation facility." (Scott Olson/Getty Images)
US

The Chicago Police Department is being scrutinized by city residents, local media, and politicians after a report by the Guardian about an allegedly secret interrogation location on Chicago’s Westside.

The investigative report, published on Feb. 24, compared the location called Homan Square to infamous CIA ‘black sites’ that are off the books and have been the scene of torture and secret imprisonment, known as rendition.

The report included interviews with several local attorneys who said that clients held at Homan Square were subjected to a litany of abuses in violation of their constitutional rights and municipal laws that govern the police department.

The newspaper also said that it is nearly impossible to gain access Homan Square.

The Chicago Police Department (CPD) issued a formal response to the report after the Guardian published its story. The statement describes Homan Square as a highly sensitive facility that is owned and operated by the CPD and is legally run.

“The facility is considered sensitive because many officers who operate there are often involved in undercover assignments, and advertising their location could put their lives at risk,” the statement reads in part.

The facility is considered sensitive because many officers who operate there are often involved in undercover assignments.

The CPD also said that Homan Square is home to “other sensitive units,” including the Bureau of Organized Crime, SWAT Unit Evidence Technicians, the Evidence Recovered Property Section, and the CPD ballistics lab.

Upon request for further clarification of the functions of Homan Square, the CPD referred Epoch Times to two media articles (by RedEyeChicago and NBC Chicago) that do not contain the name of the overall facility but do describe the Evidence Recovered Property Section.

One of the articles, published late 2013, describes a warehouse that’s home to 80,000 illegal weapons seized by the CPD that were used in some of the city’s most violent crimes. The guns are destroyed once the related case is closed, but some have been sitting there since the 1960s.

In its statement, the CPD characterized the section as a place “where the public is able to claim inventoried property.”

The CPD also refuted the claim that lawyers can’t access clients at the location saying they abide “by all laws, rules and guidelines pertaining to any interviews of suspects or witnesses.”

“If lawyers have a client detained at Homan Square, just like any other facility, they are allowed to speak to and visit them,” CPD said.

The CPD said the portion of the Guardian’s report that described unsearchable records of people held at the location was also erroneous.

“There are always records of anyone who is arrested by CPD,” the statement reads. “This is not any different at Homan Square.”

According to a representative for the CPD, who would only speak on background to the Epoch Times, the Guardian only tried once to contact them for clarification or comment and that was one hour before publication. The Guardian report does include the CPD’s statement, but notes it was released after the original story was published and that the CPD wouldn’t answer further questions.

In response to an Epoch Times inquiry, a Guardian U.S. representative said that the CPD’s characterization of events is “completely false.”

“The Guardian initially contacted Chicago PD five days before publication (on Feb. 19) with a detailed list of questions about Homan Square,” said the representative via email. “The first time we heard from Chicago PD was on Feb. 24, over eight hours after publication of the initial Homan Square report.”

On Thursday, follow-up Guardian reports on Homan Square included more firsthand accounts of individuals who said that they were literally “held hostage” and “strapped” inside the facility without being allowed to consult an attorney. The initial report explained that only one person who had been held there was willing to go on the record out of fear of retaliation.

Some public officials and local civil rights groups are now calling for a more formal investigation into the operations of Homan Square.