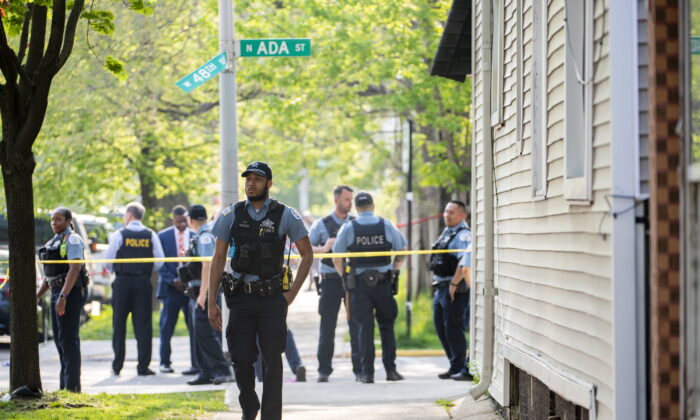 Chicago police work the scene of a fatal drive-by shooting in the 4800 block of South Ada Street, in the Back of the Yards neighborhood in Chicago, on May 10, 2022. (Tyler Pasciak LaRiviere/Chicago Sun-Times via AP)
Crime and Incidents

At least 52 people were shot and 10 were killed in separate shootings across Chicago over Memorial Day Weekend, officials said Tuesday.

One of the victims, Jeremy Benson, 33, was shot and killed on Sunday morning while he was driving in the West Garfield Park neighborhood, officials said, according to the Chicago Sun-Times. As he was driving, he was shot and crashed into a median before he was rushed to Mount Sinai Hospital, where he was pronounced dead.

Another male was shot and killed in the Englewood neighborhood on Chicago’s South Side, officials told the paper. The shooting occurred at a birthday party and sent people running into the street. Later, officials confirmed a 24-year-old had died.

“They won’t even let me see his body,” the man’s mother said. Neither the mother nor the man were identified by the Sun-Times. “They could at least let me hold his hand,” she told the outlet.

Later on Sunday, a male was killed and four others were injured during a domestic dispute in Chicago’s Humboldt Park. The incident led to a standoff with Chicago’s SWAT team. The shooter, 23, was arrested about an hour later, officials said.

In another apparent mass shooting incident, five people were seriously wounded after a fight broke out early Sunday morning in the Lawndale neighborhood on Chicago’s West Side. Five people aged 16 to 33 were on a sidewalk on South Karlov Avenue at around 1:30 a.m. when a fight broke out and a shooting ensued, police told local media outlets.

On Saturday, two males were killed after they opened fire in Englewood at around 5 p.m. on South Bishop Street, police said. After they shot each other, both males were transported to the University of Chicago Medical Center, where they were pronounced dead. One of the shooters was identified as 29-year-old Derrick Washington, authorities said.

Another person was shot and killed on the South Side on Saturday at around 1:30 p.m. on West 63rd Street, according to police. The man’s age and identity were not provided, and no suspect has been taken into custody, police said.

A man was shot and killed on Tuesday morning in Brighton Park on Chicago’s Southwest Side, officials told the Sun-Times. The male, 25, was in a vehicle when a dark-colored car pulled next to him and someone inside fired shots. The incident occurred at around 12:30 a.m.

In another incident, three people were shot, including one fatally, in Burnside on the South Side on Monday night, said police. They were standing on a sidewalk at around 7 p.m. when someone opened fire, police said.

Two hours before that, at 5 p.m., a man was shot in a separate incident Gresham on the South Side. Police said the male, 27, was in the 8600 block of South Aberdeen Street when he was struck by gunfire, according to the Sun-Times.

Also on Monday morning at around 2:50 a.m., a 31-year-old man was shot in the Englewood district while he was inside a residence, officials told the paper.