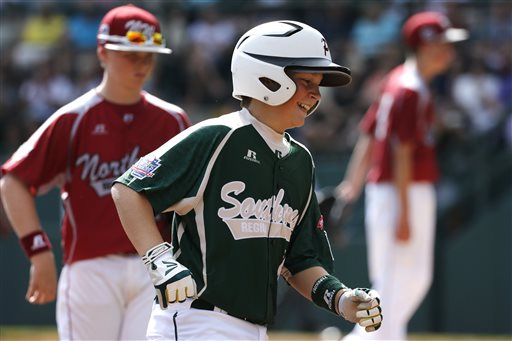 Pearland East of Pearland, Texas will face Jackie Robinson West of Chicago, Illinois in the Little League World Series on Tuesday in an elimination game.

The teams, which are in the final four in the United States bracket, are set to start playing at 7:30 p.m. EDT.

The winner of this match will face the loser of Nevada and of Pennsylvania.

See Associated Press recaps of the two games on Monday below.

Chicago’s Joshua Houston (17) drives in a run with a single off Cumberland pitcher Trey Thibeault in the fifth inning of an elimination baseball game at the Little League World Series tournament in South Williamsport, Pa., Monday, Aug. 18, 2014. It proved to be the game-winning run, with Chicago winning 8-7. (AP Photo/Gene J. Puskar)

After Darion Radcliff’s RBI single tied the score, Houston stepped drove a line drive down the left field line to bring in pinch-runner Lawrence Noble from second base.

Cumberland scored five runs in the bottom of the third to take a 7-6 lead, but couldn’t score in the last two innings and was eliminated.

SOUTH WILLIAMSPORT, Pa.—Layne Roblyer hit his second home run of the tournament, helping Pearland, Texas, to an 11-4 victory over Lynnwood, Washington, on Monday in the Little League World Series.

Roblyer, who homered against Philadelphia on Sunday, had a three-run shot in the third inning against Lynnwood, which was eliminated.

Pearland (2-1) scored early, getting a run in the first inning followed by Roblyer’s shot to the lawn seats in right field. Christian Terranova scored on a passed ball in the fourth inning.

Pearland led 5-0 before Lynnwood (1-2) got on the scoreboard with three runs in the bottom of the fifth.

Two doubles and a single from the Northwest regional champions made the deficit reasonable, but Pearland scored five runs on two wild pitches, a passed ball and a single in the sixth to seal the win.