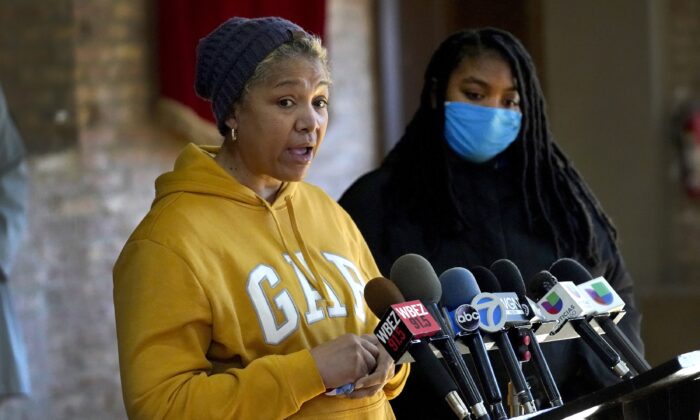 Cheri Warner, left, stands with her daughter, Brea, and speaks calling for the Chicago school district and teacher's union to focus on getting students back in the classroom in Chicago, Ill., on Jan. 10, 2022. (Charles Rex Arbogast/AP Photo)
US News

Chicago officials and leaders of the city’s teachers’ union have reached a deal that will see teachers return to classrooms on Tuesday.

Chicago Public Schools (CPS) and the Chicago Teachers Union (CTU) hammered out a pact after nearly a week of negotiations.

Under the new deal, teachers and other staff members must return to schools on Tuesday and in-person classes will resume the following day.

“After being out of school for four days in a row, I’m sure many students will be excited to get back into the classroom with their teachers and peers, and their parents and guardians can now breathe a much deserved sigh of relief,” Chicago Mayor Lori Lightfoot, a Democrat, told a press conference announcing the deal.

Lightfoot had resisted union efforts to switch to virtual learning until at least mid-January. CTU leaders argued a recent spike in COVID-19 cases and an alleged lack of safety measures in schools made it too dangerous to teach in-person.

One sticking point was whether to introduce COVID-19 testing for all students, forcing parents to opt-out if they didn’t want their children tested. The agreement includes the goal of ramping up a testing program that would have at least 10 percent of students in every school tested on a weekly basis.

There are also triggers outlined in the deal that, if reached, would automatically shift a school to virtual classes for a period of time.

“It’s not a perfect agreement. But it’s something that we can hold our heads up about, partly because it was so difficult to get,” CTU President Jesse Sharkey told a remote briefing on Monday night.

“It does include some important things which are going to help safeguard ourselves and our schools and we look forward to continuing to keep our members united, and continuing to do the work to serve the people in the city and children of Chicago,” he added.

The union’s House of Delegates approved the deal but members have not yet voted on it. Some members expressed support after the agreement was reached and city officials said they were optimistic that the deal, which runs through the end of the school year, would be cleared by the union.

The White House had been in touch with Illinois Gov. J.B. Pritzker, Lightfoot, and the union, but there was no immediate sign that officials helped break the logjam that had left parents scrambling.

Lightfoot noted that studies indicate school closures don’t bring down COVID-19 case numbers and lamented how some 100,000 children disengaged from the city’s school system when schools were remote earlier in the pandemic.

“Hopefully we put that issue behind us once and for all,” she said. “I want to see us get back to what our primary function is, which is teach our kids and model the kind of example that we want them to follow.”