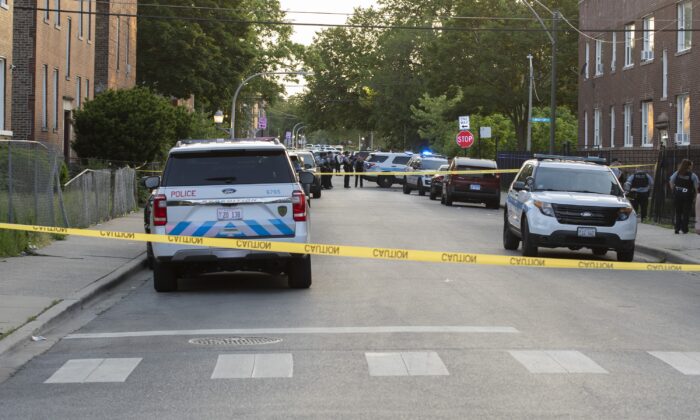 Chicago Police set up near the corner of 64th St. and Loomis Blvd., an intersection near the location where an officer was shot, in Chicago, on June 1, 2022. (Brian Rich/Chicago Sun-Times via AP)
Crime and Incidents

CHICAGO—A man with an arrest record for a gun charge that was later dropped is suspected of shooting and seriously wounding a Chicago police officer, according to a police alert sent Thursday.

The 28-year-old, who remains at large, was identified in the alert as the gunman who opened fire on a marked police car on Chicago’s South Side, the Chicago Sun-Times reported.

Police Supterintendent David Brown said during a news conference that two uniformed officers were in a marked squad car attempting a traffic stop in the West Englewood neighborhood on Wednesday afternoon. The car the officers tried to pull over first sped up, then slowed down to pull even with the squad car, Brown said. At that point, someone in the car started shooting at the officers.

The officer who was driving was wounded in her upper body, Brown said. The officer in the passenger seat drove the wounded officer to a hospital, where she was in serious condition. Her name has not been released.

The suspects’ vehicle crashed nearby and suspects fled from it, police said.

The suspected gunman lives less than 2 miles from the scene of the shooting, the police alert said.

Court records show he was arrested in October 2020 after he was spotted speeding and running red lights on the South Side. Arresting officers found a handgun under the driver’s side floor mat.