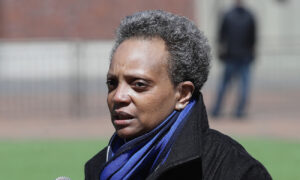 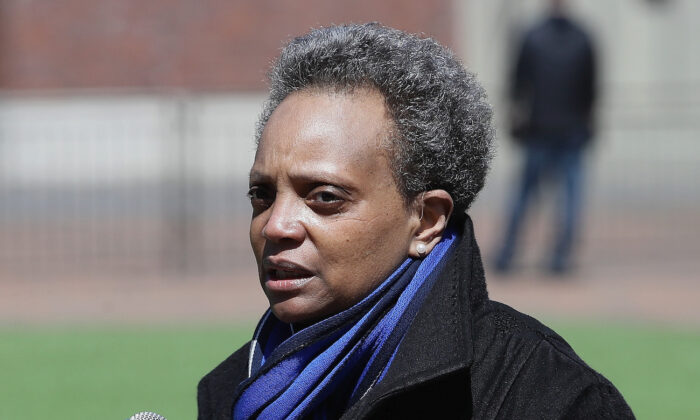 CHICAGO—Chicago Mayor Lori Lightfoot on Monday unveiled her version of a civilian police oversight plan that allows her to retain the key powers of picking the police chief, negotiating contracts with police unions, and deciding on police policy disputes.

For about four years, mayors in Chicago have been pressured by activist groups to give key policing powers to elected civilians. Lightfoot herself was once such an advocate, having chaired the Police Accountability Task Force under former Mayor Rahm Emanuel.

But her stance on the issue took a sharp turn since she became mayor two years ago. Her talks with activist groups have broken down numerous times. Amid a new push by activists, she made it clear yet again that she is not giving those powers away.

“Public safety is one of the most critical responsibilities of any mayor, me and anybody who comes after me,” Lightfoot said at a Monday press conference about why she must pick the police chief. “Because the buck stops with me, I will ultimately, as a mayor and as any other subsequent mayor, be making that decision.”

Her plan calls for the formation of a seven-person civilian police oversight commission. Each member would be nominated by elected representatives from the city’s 22 police districts. The mayor has the final say on the makeup of the commission.

In hiring the city’s police chief, the commission would vet all the candidates and present three options to the mayor, who would pick one candidate for approval by the city council. The same process will be followed for the hiring of the chief administrator of the Civilian Police Oversight Office and Chicago Police Board members.

The commission can “review and provide input” on the policing policies but will not have the final word on any policy disputes. It can also recommend changes to the Chicago Police Department’s annual budget.

Their combined plan gives an 11-member civilian commission the key powers of hiring and firing the police superintendent, negotiating police contracts, and setting CPD’s budget. The groups ask Chicagoans to vote on these proposed changes on the 2022 primary ballot.

Even if Chicagoans reject these changes at the voting booth, the plan says, the commission still has the final say on disputes over police policies unless two-thirds of the City Council decides otherwise.

The two competing plans will be considered by the Committee of Public Safety. One of them is expected to advance to the City Council for a final vote in June. The chairman of Committee of Public Safety, alderman Chris Taliaferro, is a longtime ally of Lightfoot, having halted a vote last March on a previous oversight plan that deprived Lightfoot of the power to decide on police policy disputes.

The movement to seek more civilian powers over policing in Chicago started about four years ago under Mayor Rahm Emanuel after the release of the Laquan McDonald shooting video. The video showed police officer Jason Van Dyke shoot McDonald, a teenager, 16 times after the latter refused to put down a knife. Van Dyke was indicted by a grand jury on six counts of first-degree murder.