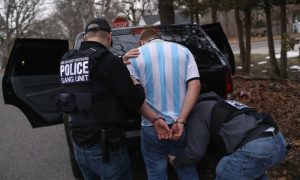 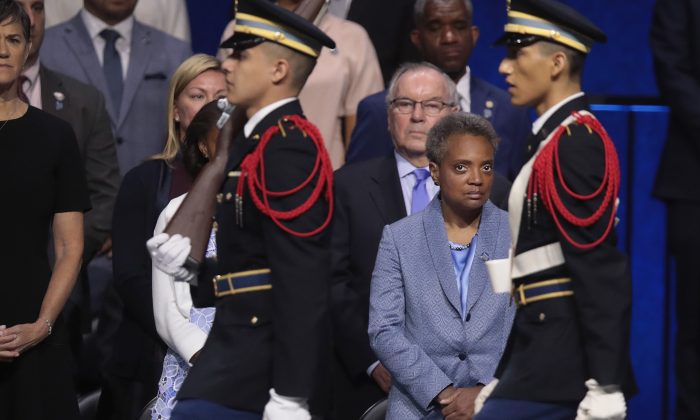 Lori Lightfoot watches the presentation of colors at her inauguration ceremony at the Wintrust Arena in Chicago, Ill., on May 20, 2019. (Scott Olson/Getty Images)
US News

Chicago Mayor Lori Lightfoot said Wednesday, July 10, that the Chicago police department would not cooperate with Immigration and Customs Enforcement (ICE) to detain residents or allow them access to their police database for the upcoming ICE raids.

Lightfoot said to the public, “they [the Chicago police] will not team up with ICE to detain any resident. We have also cut off ICE from access from any CPD databases and that will remain permanent.”

President Trump announced the ICE raids in June but then halted the order.

“At the request of Democrats, I have delayed the Illegal Immigration Removal Process (Deportation) for two weeks to see if the Democrats and Republicans can get together and work out a solution to the Asylum and Loophole problems at the Southern Border,” the president tweeted. “If not, Deportations start!”

The impending raids are expected to focus on 10 major cities where the Department of Justice has sped up immigration cases for thousands of recent arrivals, including Los Angeles, New York, Chicago, and Houston.

“[ICE agents are] ready to just perform their mission which is to go and find and detain and then deport the approximately one million people who have final removal orders,” he said. “They’ve been all the way through the due process and have final removal orders. Who among those will be targeted for this particular effort or not is really just information kept within ICE.”

Speaking to reporters about the raids the President said, “I don’t call them raids. I say they came in illegally, and we’re bringing them out legally.”

President Trump: “Well, I don’t call them raids. I say they came in illegally and we’re bringing them out legally. These are people where we have the papers, we’ve gone through the court system. They’ll be starting fairly soon.” pic.twitter.com/cJ6A2d3EAL

The raids will focus on areas that are known as “sanctuary” cities. A sanctuary city is defined by the Center for Immigration Studies (CIS).

“’Sanctuary’ is the practice of shielding aliens in the United States in violation of law from the reach of federal immigration officers. Once the isolated practice of a few church groups permitting a family or two that had crossed the border illegally to shelter in their sanctum, it has morphed into something completely different in recent years.”

These are cities in the United States that follow certain police procedures that shelter illegal immigrants.

According to Dan Cadman from CIS, “sanctuary” used to be undertaken by small church groups but at some point expanded to whole towns, counties, cities, and even states like California and Oregon.

Those who are advocates for sanctuary cities are advising immigrants who might be targeted by the raids to know their rights.

On Thursday, House Speaker, Nancy Pelosi said in a public notice, “An ICE deportation warrant is not the same as a search warrant. If that is the only document ICE brings to a home raid, agents do not have the legal right to enter a home.”

Mayor Bill de Blasio of New York (another sanctuary city), tweeted, “This is a policy of fear and division—and more proof that we need to abolish ICE. Our city is stronger, safer and more prosperous than ever BECAUSE of our immigrant communities. We will do EVERYTHING we can to protect them.”

In an interview with NPR, Houston Mayor Sylvester Turner told Audie Cornish how their sanctuary city is dealing with the upcoming ICE raids.