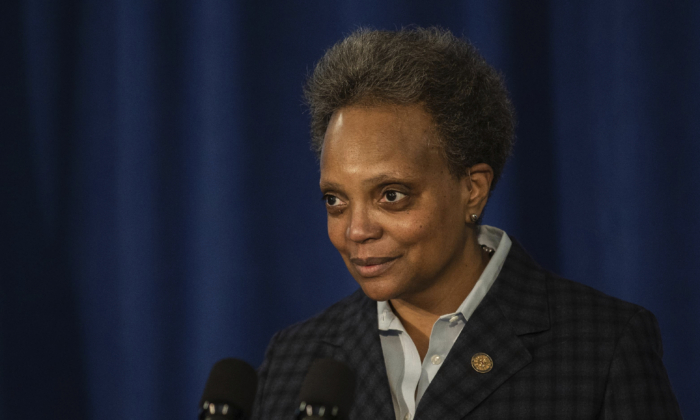 Chicago Mayor Lori Lightfoot announced that people will have to show proof of COVID-19 vaccination to enter restaurants, bars, and gyms—becoming the latest city to mandate a vaccine passport.

“Despite our diligent and equitable vaccine distribution efforts throughout this year, unfortunately, our city continues to see a surge of COVID-19 Delta and now Omicron cases,” Lightfoot said in a statement.

The mayor said that “new steps must be taken to protect the health and wellbeing of our residents” by mandating vaccine passports.

“This public health order requiring proof of vaccination to visit certain indoor public places is a necessary measure to ensure we can continue to enjoy our city’s many amenities as we enter the new year,” Lightfoot, a Democrat, added in the statement.

People over the age of 16 will be required to provide identification that matches their vaccine card or another form of verification. Employees at venues who aren’t vaccinated will have to wear masks and show proof of a weekly COVID-19 test.

“There’s no denying that we’re in a fifth wave of COVID-19. This new wave is seemingly more deadly than the last, spreading faster and causing profound harm,” Lightfoot said during a news conference. “To be clear I’ve not been this concerned about COVID-19 since the early days of the pandemic in 2020. If you wish to live life as normally as possible with the easy to do the things that you love, you must be vaccinated in the city of Chicago starting Jan. 3.”

Vaccine passports have been flagged by privacy and civil liberties groups as draconian, and have argued that such systems create two distinct classes of people: vaccinated and unvaccinated. Over the weekend, tens of thousands of demonstrators came out to protest against vaccine passports and other mandates across Europe, including cities in France, Germany, Austria, the UK, and the Netherlands.

The Omicron variant accounts for about 73 percent of all U.S. cases now, said the Centers for Disease Control and Prevention (CDC) in a recent update. Although the World Health Organization, which named the strain Omicron in late November, expressed concern that the variant can spread especially quickly, it’s not clear yet whether it will lead to more hospitalizations or deaths.

“Right now, there are about a thousand people hospitalized with COVID-19 across New York City. That’s about a quarter of where we were at the peak of last winter’s wave and less than a tenth of where we were in the spring of 2020,” New York City health commissioner Dr. Dave Chokshi said on Monday, blaming the rise in infections on the “Omicron wave.”

South Africa’s Ministry of Health officials said late last week that the rate of hospitalization from Omicron is less than 10 percent of Delta’s hospitalization rate during its initial wave earlier in the year.