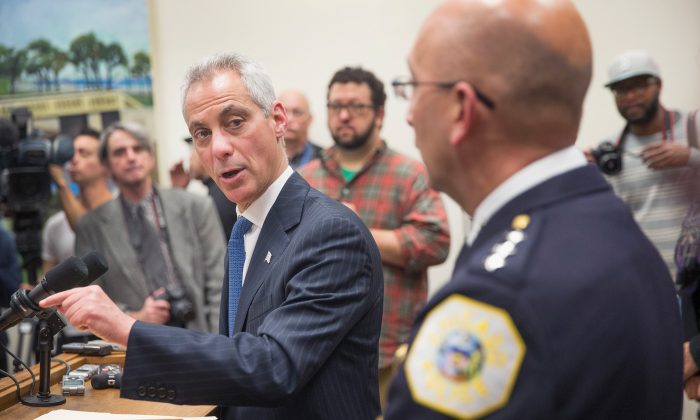 CHICAGO—Mayor Rahm Emanuel, known for keeping vise-like control over Chicago and his own political image, finds himself in the weakest position of his long public career as he struggles to respond to a police scandal, claims of cover-ups at City Hall, and calls for his resignation.

But the former White House chief of staff has said repeatedly that he will not step down.

The nation’s third-largest city has no process for a mayor to be recalled. And most of the cries for Emanuel to resign have come from grassroots activists and residents, not from the city’s political powerbrokers. The next election—should he seek another term—isn’t until 2019.

No citizen is a second-class citizen in the city of Chicago.
— Chicago Mayor Rahm Emanuel

On Wednesday, Dec. 9, the mayor used a special meeting of the Chicago City Council to try to calm the firestorm, apologizing for the fatal shooting of a black teen by a white officer and promising “complete and total” reform.

“I take responsibility for what happened because it happened on my watch. And if we’re going to fix it, I want you to understand it’s my responsibility with you,” Emanuel said during a sometimes-emotional speech that lasted nearly 45 minutes. “But if we’re also going to begin the healing process, the first step in that journey is my step.

The remarks were Emanuel’s lengthiest and seemingly most heartfelt since the public got its first look last month at the squad car video that showed 17-year-old Laquan McDonald veering away from officer Jason Van Dyke before he began shooting, hitting McDonald 16 times. Van Dyke is charged with first-degree murder.

Critics have repeatedly accused him of keeping the footage under wraps until after he won a tougher-than-expected spring election for a second term. The mayor has denied the claim and acknowledged Wednesday that he should have pressed for prosecutors to wrap up their investigation sooner so the video could be made public.

But his contrition did little to ease the anger in the streets. Hours after the speech, protesters overflowed an intersection in front of City Hall, then marched through the financial district and blocked a major intersection for a short time as police directed traffic around them. Officers guarded the doors to the Chicago Board of Trade as demonstrators approached.

Calling the speech “politically expedient,” Davis said, “I don’t want to hear anything from him except, ‘I tender my resignation.'”

Davis, who is black, said she fears for her 25-year-old grandson when he comes home from college.

“Each time he comes home, my heart is in my throat in case he meets up with a racist cop,” Davis said. “We shouldn’t have to live like this.”

Since the video emerged, Emanuel has scrambled to contain the crisis. He fired his police superintendent after days of insisting the chief had his support. He also reversed course on whether the Justice Department should launch a civil-rights investigation, saying he would welcome it only after presidential candidate Hillary Clinton and other top Democrats endorsed the idea.

In news conferences, he has appeared worn down, fumbling answers to reporters’ questions or avoiding them entirely by walking away, with cameras rolling.

“I don’t think I’ve ever seen him grapple with anything quite like this,” said longtime ally and adviser David Axelrod, who also served with Emanuel in the Obama White House.

Axelrod said Emanuel worked on the speech all weekend, with input from him and others. But he said the speech alone isn’t what matters.

The most likely effect of the crisis will come in the form of pushback from aldermen, who have long been considered a rubber stamp for the mayor’s initiatives, said political consultant Delmarie Cobb. She said the black community “has been awakened,” and Emanuel can expect a tougher re-election if he tries again.

“He definitely won’t run unopposed, and it will be a viable candidate,” said Cobb, who is black.

A Call for Congressional Inquiry Into Police Practices, Racial Profiling

The mayor won re-election in April by a healthy margin, but only after suffering the embarrassment of not getting a majority in a five-candidate February election, forcing the first mayoral runoff in decades.

At the time, he pledged to listen more and to “bridge the gaps between the things that divide us.”

In the months that followed, his public schools CEO, who oversaw closings of about 50 schools that angered many residents, was indicted on corruption charges. Emanuel also pushed through the largest tax increase in city history to deal with a budget crisis.

His administration has warned of massive mid-year layoffs in the public schools and is in the midst of rocky contract negotiations with the Chicago Teachers Union. This week, union members are voting on whether to authorize a strike. They could hit the picket lines as early as March.