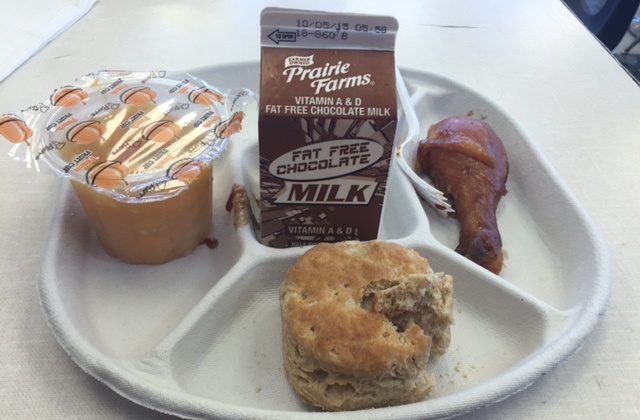 Students at Roosevelt High School in Chicago are boycotting the cafeteria lunches because they say they’re too small and not tasty enough.

The tactic is intense considering 95 percent of the students are eligible for free or reduced-price lunch.

The students have targeted Aramark, which provides the food for both the school and a nearby prison.

“Today, our lunch at Roosevelt is no better than the ones in Cook County prison,” the students wrote on a website marking the boycott.

“Prisons only care about one thing when it comes down to meals—that it has enough nutrients for what the human body needs, it doesn’t matter if it tastes or smells bad. One online review of the prison food shows that prisoners get better food from Aramark than we do. For example they have corn muffins, steamed carrots, green beans, also mac and cheese. They also drink Kool-Aid.”

They’re also created a MoveOn petition that has garnered 466 signatures so far.

“It’s a human right to have decent food, not the lowest quality of food.”

Aramark and the Chicago Public Schools system say they’re looking into the issue. The students say before Aramark took over about two years ago, most of the meals were a much higher quality and more nutritious.

The students want the freedom to go off campus for food if better food can’t be provided on campus, and also want vending machines installed for more options.

Some teachers are supporting the act.

“I think it’s especially important for young people in Chicago—where we see so much corruption, cronyism, and nepotism—that they learn how to make change within large organizations,” said Tim Meegan, a veteran social studies teacher at Roosevelt.

“This is just one of many diverse tactics that we are trying to teach young people so they are fully equipped to participate as citizens in a democratic society.”

Aramark and the school system split a $3.15 federal payment for each free lunch a student takes, so the boycott is costing both money.