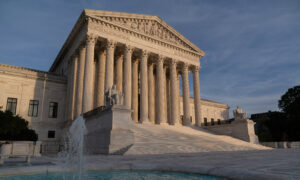 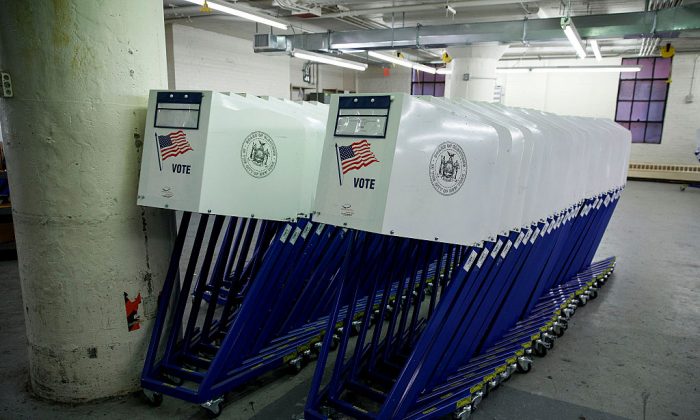 Voting booths sit at a New York City Board of Elections voting machine facility warehouse in the Bronx borough in New York City on Nov. 3, 2016. (Drew Angerer/Getty Images)
US

Chicago Had More Votes Than Voters in 2016 Elections

Votes may have been manipulated in Chicago during the 2016 elections, according to recent findings outlined by separate figures obtained from the Chicago Board of Elections through a Freedom of Information Act (FOIA) request.

Chris Cleveland, chairman of the Chicago Republican Party, told Chicago City Wire that “on a whim,” he filed a FOIA request, which uncovered the findings.

It showed that while 1,101,178 people in Chicago voted in the general election, an earlier post from the election board’s website said 1,115,664 votes were cast.

Cleveland told Chicago City Wire that the Chicago Republicans have asked the Board of Elections repeatedly since January to explain what took place, but continue to be told “there will be a final report.”

Jim Allen, a board spokesman, told Chicago City Wire that “not all voters were entered electronically into the system at first.” Allen’s response would explain fewer voters being counted initially, not more. After the response, Cleveland said he filed an updated request for the data.

Immediately following the 2016 elections, a similar case was discovered in Detroit, where voting machines in more than a third of its precincts recorded more votes than there were voters.

Michigan is responding by replacing all its voting machines, and the process is expected to be completed in August 2018. The Detroit News reported on Dec. 12, 2016, that “it’s unclear how many votes were added in Detroit.”

The cases add to a growing list of discrepancies and outright fraud that took place during the elections.

On June 9, 12 Democrat staffers were charged with submitting fake or fraudulent voter registration applications. According to an AP report, the individuals worked for the Indiana Voter Registration Project.

On Aug. 1, two research organizations announced that 11 California counties have more registered voters than they do voting-age citizens—raising concerns that illegal immigrants voted in the election.

The two organizations, the nonprofit Election Integrity Project California and the conservative watchdog group Judicial Watch, sent a six-page letter to the California Secretary of State Alex Padilla that outlines their findings and threatens a lawsuit against her and the 11 counties if the issues aren’t corrected within 90 days.

“As the top election official in California, it is your responsibility under federal law to coordinate California’s statewide effort to conduct a program that reasonably ensures the lists of eligible voters are accurate,” it states.