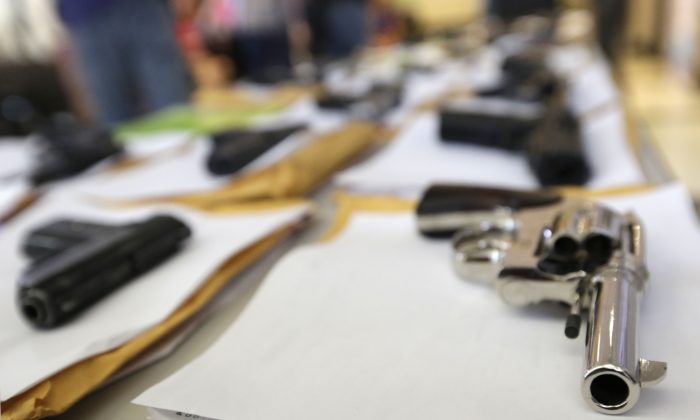 Chicago police display some of the thousands of illegal firearms they have confiscated so far this year in their battle against gun violence in Chicago on July 7, 2014. (AP Photo/M. Spencer Green)
US

CHICAGO—The mass shooting at an Oregon community college last week thrust the debate over the nation’s gun laws to the center of the presidential race. At least some of the Republicans who are running have pointed to Chicago as proof that gun control does not work.

The city has a reputation for having some of the country’s strictest gun laws but has experienced an increase in homicides and shootings this year, which Republican presidential hopefuls Donald Trump, Chris Christie and Carly Fiorina say proves their point.

“You look at Chicago, it’s got the toughest gun laws in the United States. You look at other places where they have gun laws that are very tough, they do — generally speaking — worse than anybody else,” the billionaire businessman Trump said on ABC’s “This Week” on Sunday.

Christie, who is New Jersey’s governor, echoed the sentiment Sunday, telling ABC News’ George Stephanopoulos that homicides are up in cities like Chicago and New York, which he said have “some of the most aggressive gun laws.”

But Chicago’s gun laws aren’t as tough as their reputation suggests. They once were, but courts have overturned or gutted many of them in recent years, forcing a city that once banned handguns and gun shops to allow both.

Former Chicago Mayor Richard M. Daley was determined to keep handguns out of residents’ hands and he fought every legal challenge to Chicago’s gun restrictions during his 22 years in office. But the U.S. Supreme Court dealt a big blow to Chicago’s gun laws in 2010 when it struck down the city’s handgun ban.

Chicago quickly enacted a gun ordinance that proponents said included some of the nation’s toughest regulations, but the city was forced to scrap some of the provisions that most angered gun rights advocates.

Where are Today’s Guns Coming From?

No gun store has opened in the city yet. That means that every gun owned legally or illegally came from somewhere else. Just how many is unclear, but Chicago’s police department seizes more illegal weapons than any other in the nation — nearly 20 a day for a total of 5,500 so far this year.

It said nearly 60 percent of recovered guns used to commit crimes in Chicago from 2009 through 2013 were first sold in states with more lax gun laws. Neighboring Indiana was the biggest source, with 19 percent of all recovered guns having been sold there first. But they came from far and wide, with Mississippi second at 6.7 percent.

Just days ago, a Chicago man was sentenced to nearly three years in prison after pleading guilty to helping purchase 43 firearms from gun shows and individuals in Indiana to sell on Chicago’s South Side.

Several Chicago residents filed a lawsuit this summer against three suburbs, accusing them of lax oversight of local gun shops that they say have been an easy source of weapons for criminals who bring guns into the city.

McCarthy, who spent most of his career on New York City’s police force, notes that former Giants wide receiver Plaxico Burress was sentenced to 20 months in prison after he accidentally shot himself in the leg with an illegal gun. By contrast, he says the sentences meted out in Chicago courtrooms are typically no more than six months.

An analysis by the Chicago Sun-Times bolsters McCarthy’s argument that courts in Cook County, where Chicago is located, aren’t nearly as tough on illegal gun possession as they might be. For example, the mandatory minimum prison sentence for illegal gun possession in New York is 3½ years, but such a conviction in Cook County carries a minimum sentence of a year in prison and judges stick to that minimum term most of the time, the paper found.

Two years ago, several black Illinois lawmakers blocked a bill backed by McCarthy and Emanuel that would have imposed stiffer prison sentences on those convicted of illegal gun possession. The lawmakers viewed it as a recipe to lock up more blacks and Latinos.