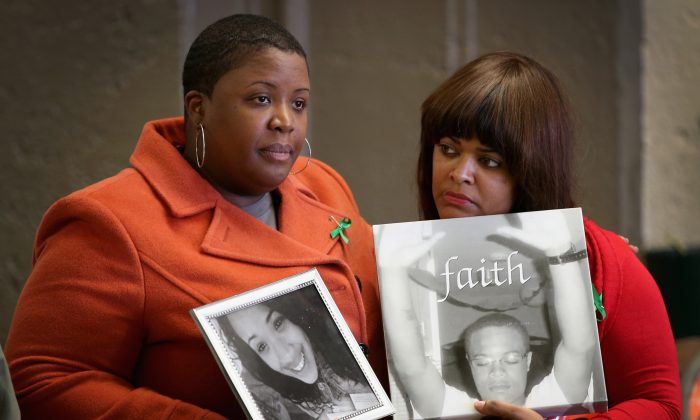 Cleopatra Cowley-Pendleton (L) holds a picture of her daughter Hadiya, 15, while standing with Shundra Robinson who is holding a picture of her son Deno Wooldridge, 18, in Chicago, on Dec. 14, 2013. Hadiya was shot and killed while hanging out with friends in a park after school on Jan. 29, 2013. Wooldridge was shot and killed while standing on his grandmother's porch on Oct. 18, 2010. (Scott Olson/Getty Images)
News

Chicago Gang Crisis: an Epicenter of Violence in America

The great American city of Chicago is making headlines once again but unfortunately for all the wrong reasons.

As America proudly celebrated Independence Day, Chicago was blistered with headlines depicting its crisis of violence, including the following:

As America proudly celebrated Independence Day, Chicago was blistered with headlines depicting its crisis of violence.

These sobering outbreaks of violence can lose the impact to shake America’s soul—they are becoming all too common.

America, listen to the heart of a mother who loves her children and lives daily with fear for their safety.

Lula Hill is one of the countless Chicago mothers who crystallizes this fear.

She lives in the South Side Chicago neighborhood of Roseland and uses both practical steps and spiritual interventions to keep her three sons alive.

The boys, Andre, 16; Fabian, 15; and Jaden, 8, have been trained by Lula to stay away from the windows of their home because of the fear of gunshots.

Lula also encourages their involvement with school, sports, and their church.

Aside from these practical steps, she anoints each of them with holy oil, while praying for divine protection, whenever any of them leave the home.

This is the heart-wrenching reality of life for one of many devoted American mothers.

In September 2013, a Chicago gang member killed a 9-year-old boy because he yelled after seeing a gun.
The child was shot dead from approximately 4-10 feet away because the killer believed he was warning rival gang members of his presence.

The tragedies of Chicago children being murdered are an ongoing reality of the city’s violence.

Agonizing tragedies include the January 2013 murder of Hadiya Pendleton, a 15-year-old honor student who had just had the happiest day of her life one week earlier. Hadiya had performed for President Obama’s inauguration.

She was shot and killed while racing to a shelter during a rainstorm. Ironically, her flight for safety was just a mile away from Obama’s Chicago residence.

On July 4, 2015, in Hadiya Pendleton Park, a park named in Hadiya’s honor, another Chicago mother wept.

“My baby’s gone, my baby’s gone … ,” she continually repeated while sobbing uncontrollably.

Latasha Banks Hall was mourning the death of her son, Vonzell Banks, a 17-year-old shot in the back while playing basketball.

The teen was known as a young man who loved his Christian faith and used his musical talent at church events.

In 2009, published reports indicated that 508 Chicago children were shot during a 16 month span with 25 killed.

Tragically, the culture of violence continues with no end in sight.

On Oct. 6, 2009, I addressed the Chicago crisis with registered letters to President Obama, the U.S. Department of Justice, and numerous officials of Chicago and the State of Illinois.

I called upon the President and government leaders to establish a Stop the Violence initiative for Chicago as highlighted in this excerpt from my letter:

“I implore you to make the elimination of violence in the windy city a top priority of your administration. If we agree that it would have been a worthwhile investment to prepare the city to host the 2016 Olympics, how much more is the value of human life? We must work to find a way to save lives, reduce hostility, and create a national model for the “audacity of hope” in all our urban areas suffering the scourge of senseless brutality.”

Tragically, the culture of violence addressed continues with no end in sight.

The eyes of America are upon Chicago, not as a city that will hold the Olympic Games, but with a clarion call to reawakening the nation from violence to hope through moral courage, determined leadership, and persevering collaboration.