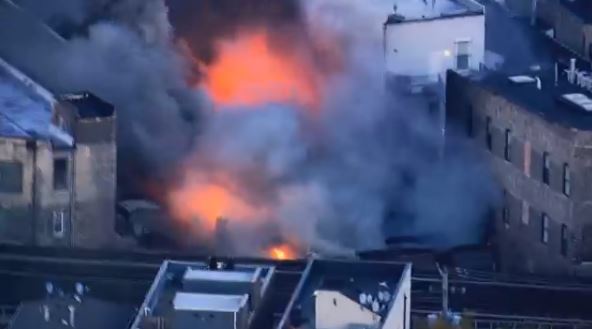 A fire burned down a building in Chicago on Friday night near the Lakeview neighborhood near the CTA Red Line tracks, and in the 3300 block of North Clark Street.

The fire was at a building that houses Roadhouse 66, Samah, and Thai Classic, located just south of the tracks that straddle Roscoe Street on the city’s North side.

The fire demolished the building, reported ABC. The building was on the edge of the Lakeview neighborhood and inside the Wrigleyville neighborhood, between the Belmont and Addison-Red metro stops.

A police officer told DNAinfo that the fire originated in Samah, a hookar bar. Firefighters withstood an explosion and saved a dog while they battled the blaze.

Someone who rode on the train past the fire said that he could feel the heat.

It was so close to the train that our skin –people were saying, and I felt it as well–our skin actually got hot as we passed the fire it was so close,” said Lawrence Well.

Service on the Red, Brown, and Purple Lines was not impacted by the fire, the Chicago Transit Authority said. Buses, meanwhile, were temporarily rerouted in the area.

Although the building was burnt down, fire crews kept the fire from spreading to other buildings. No one was injured.