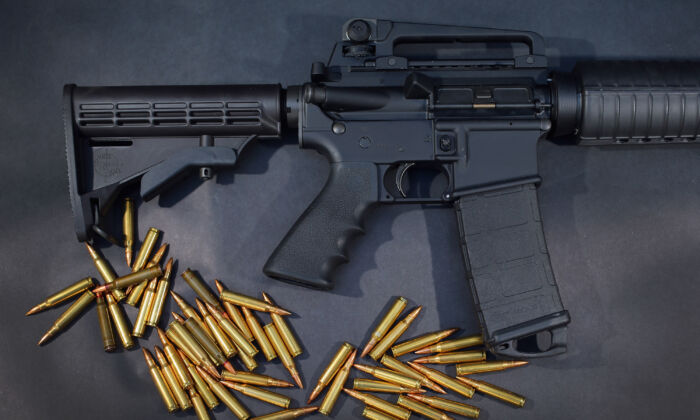 In this photo illustration, a Rock River Arms AR-15 rifle is seen with ammunition in Miami, Fla., on Dec. 18, 2012. (Joe Raedle/Getty Images)
US News

Illinois’s Cook County, which includes Chicago, is proposing a higher tax on guns and ammunition in an attempt to deal with a budget shortfall.

Cook County Board President Toni Preckwinkle said the proposed tax on guns and ammo would encompass the city and suburbs, without offering many details.

“If we were to pursue a tax on something like guns and ammo, clearly that wouldn’t be popular with the [gun lobby] out there, and it may not generate $50 million, but … it is consistent with our commitment to pursuing violence reduction in the city and in the county,” Preckwinkle’s chief of staff, Kurt Summers, told the publication.

In Chicago, the murder rate has spiked 25 percent this year compared with 2011.

Commissioner Timothy Schneider, however, said that the tax might hurt businesses in the county that sell the products.

“On first blush, anything that takes Cook County out of a level playing field with other counties, I can’t support,” he told the Chicago Tribune.